Two brothers in search of their twins, a father in search of his son, a condemned man reprieved, a long-lost mother found. At its heart, “The Comedy of Errors” is a story about a family joyfully put back together.

Keira Loughran’s production embraces the celebratory spirit of the play: her Ephesus is a space of inclusion where all comers can dress and love how they want without fear of reprisal. The casting for this production is visibly young, racially diverse, and gender non-conforming. 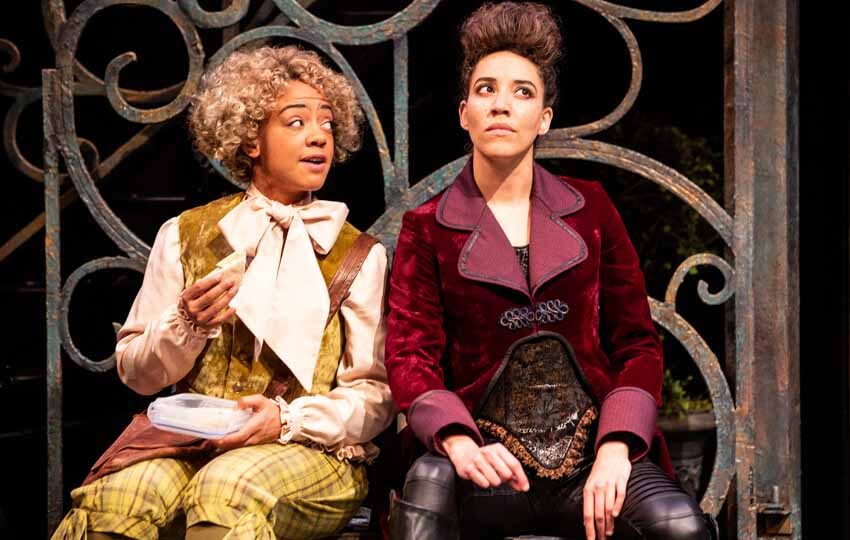 The Syracusan brothers are recast as sisters for whom dressing as men provides freedom of movement – and perhaps some new insight into their own identities. The patrician Duke of Ephesus carries off women’s dress with commanding elegance, and the Courtesan is a caring, strong, transgender woman with an eye on her healthy business.

Though the errors of mistaken identity cause the characters to vie with each other, Ephesus’s spirit of respect and love prevails.

We shadowed this production as it developed to learn how the cast and creatives worked to create an Ephesus which reflects the increasing diversity and inclusivity we aim for on our stages, in our rehearsal halls and auditoria.

Snapshot 1: Our First Day at Rehearsal

Kim: It’s a freezing cold morning in March, and we arrive at the rehearsal hall in the Stratford Normal School just in time. As we settle in on chairs near the long rehearsal table, I’m struck immediately by how young the cast is, overall; how young and…. Not White. It looks like the cast of a show at Factory in Toronto, or maybe at Cahoots or Nightwood.

Here is our first clue to the way this “Comedy of Errors” will evolve: this rehearsal space doesn’t feel “typically” Stratford. It is filled by bodies young and old, brown and white and black – and in that rich tapestry lies its normalcy. Here, diversity is clearly the norm – it’s the given.

That’s an important shift from the rehearsal terrain lots of actors will be familiar with, terrain where you enter and are implicitly asked to conform to existing expectations about who you should be, how you should look or sound.

This shift, we can tell, affects how everyone in this rehearsal room approaches their work. It makes the work’s baseline a rich inclusivity.

Erin: On this first day, I was struck by the emphasis on welcome and inclusion in the rehearsal space. I had briefly wondered, in advance of rehearsal, what actors make of academics/outsiders coming into their workspace. Throughout this process I’ve been thinking about how to be an actor is to be constantly aware of how your body, your voice, is seen and read, and there’s a kind of vulnerability that comes with that which resonates with the experience of the way we present and perform gender (and other aspects of who we are). 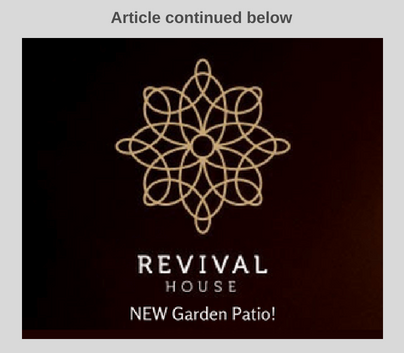 When we entered the hall, the cast and creative team were already seated around the table in anticipation of a scene reading: as a group, everyone waved and greeted us with friendly enthusiasm. At every rehearsal we attended, whenever someone new entered the group, Keira would initiate a group introduction. To me this repeated gesture enacted a kind of inclusiveness (making sure everyone knows and has a relation with everyone else), transparency (everyone knows exactly what ‘role’ everyone else is playing, what their motives are), and trust.

After introductions, the actors broke away to do a warm-up exercise, standing in two lines and facing each other. Keira asked them to act as though they were each other’s mirror. My attention was quickly drawn away to Qasim Kahn and Jessica Hill, who were giggling as they mimicked each other, making funny faces. Their enthusiasm noticeably spread over the group. In the exercise that followed, the actors broke out of their lines, and started moving around the rehearsal space, taking turns finding their characters through their walks while their “twin” shadowed them a few feet behind. 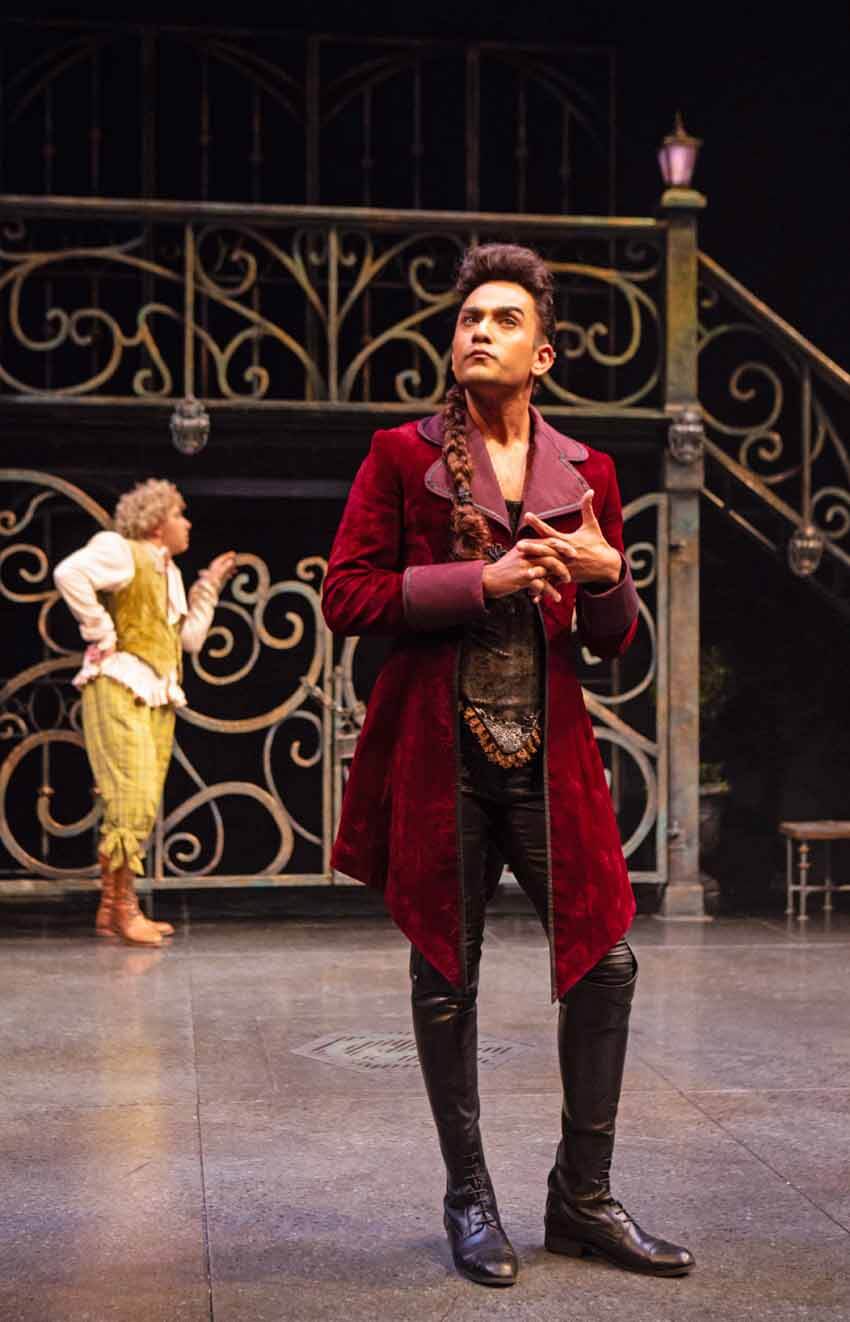 Watching this exercise, it became clear to me that “twinness” was an even greater theme of this production than I had been aware – all of the characters, from the four mains, to the sisters Luciana and Adriana, to the Courtesan and Luce, to the pair of constables, had twins to work with. It was fun and fascinating to watch how those individual pairs formed a relationship – but also, again, how the pairs became units of the whole cast.

It seemed like the deliberate work of creating these relationships was instrumental to building the rapport that would give Ephesus its important feel as a place of both trust and play. 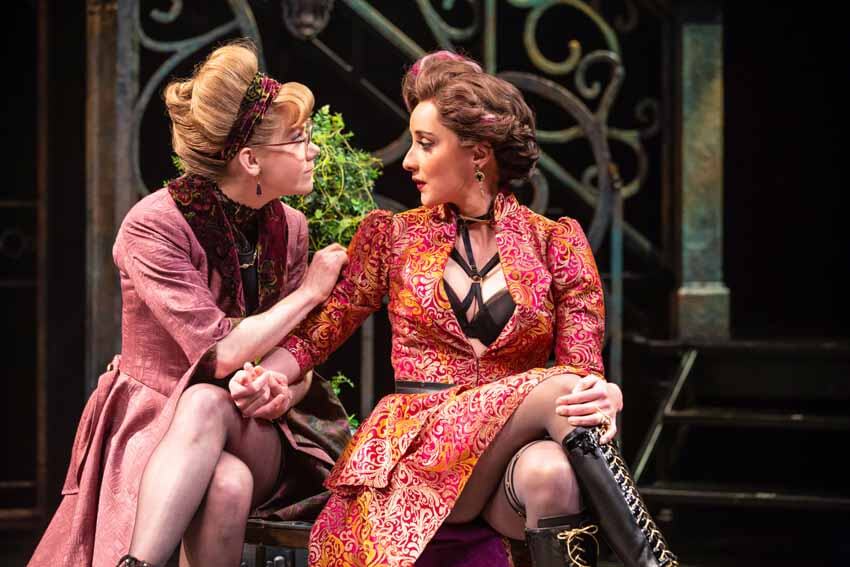 Cassandra and Sunny began by sharing stories of their trans histories – a gesture of incredible generosity that allowed them to become both vulnerable, yet also powerful, before us. After sharing some collective history of trans activism (including important details about violence against trans women sex workers, and an acknowledgement of the work of trans women of colour in the LGBTQ2SIA movement) they spent some time talking with us about the history of trans representation in the media.

Kim: Sunny and Cassandra both emphasized how every person’s experience of their gender and sexuality is individual, but that TV and film depictions typically present very limited narratives of trans folk, in which their individuality is erased in favour of depictions that reinforce dominant-culture norms and expectations.

Unfortunately, more often than not, those expectations lead to representations of trans characters experiencing violence and death on stage and on screen.

Later, we all participated in a group exercise that asked us to consider our own sex and gender identities through the lens of non-dominant, non-binary experiences. Sunny laid out a triangle in the middle of the room, anchored by pages of white paper marked with the terms “male”, “female”, and “other”. He then asked us as series of personal questions, and he asked us to stand in a place in the room that represented our responses to them.

What did it feel like to see ourselves – and to feel ourselves – as “othered”, as “outside” the norms the words on the pages represented? We began to imagine, in and through our bodies, some of the obstacles trans people may experience – rejection by loved ones, difficulties obtaining official ID, emotional and psychological exhaustion. We also began to imagine the strengths trans people gain in the process – such as resilience, and the ability to empathise with others facing discrimination.

Erin: The workshop also clarified some of the challenges with which members of the cast were grappling as they worked to discover their characters’ gender identities.

Keira gave each actor in the cast the freedom to work with costume, text, personal experience, rehearsal experience, and other research to determine for themselves how their character might prefer to identify. (Many of the characters that have emerged, such as Rod Beattie’s Luce, Sébastien Heins’s Courtesan, and Juan Chioran’s Duke, are incredibly complex in their gender fluidity, rich in their layered senses of embodied self.)

The freedom of Keira’s directorial offering, however, also elicited some anxious responses. Some cast members expressed uncertainty about how to connect with a gender experience outside of their own; others articulated their concern over presenting a cohesive and unified gender “world” to the audience. Still others expressed a desire to present their characters as likeable and complex humans while avoiding campy stereotypes. Understandably, they wanted to get their portrayals of non-binary sex and gender experiences honest, and right.

As the workshop day went on, and as we heard Sunny and Cassandra’s stories give way to our own learning, we could see and hear and feel the cast’s deep determination to represent characters like the Courtesan and the Duke as more than just character types – to realise Keira’s vision of Ephesus as a space where all bodies live joyfully together, with acceptance and without judgement.

Snapshot 3: At the Dress Rehearsal

Kim: The lights dim; when they come back up the Duke and Egeon appear. Juan Chioran is wearing an elegant jacket and long skirt, every inch a regal ruler – but a ruler with a difference. 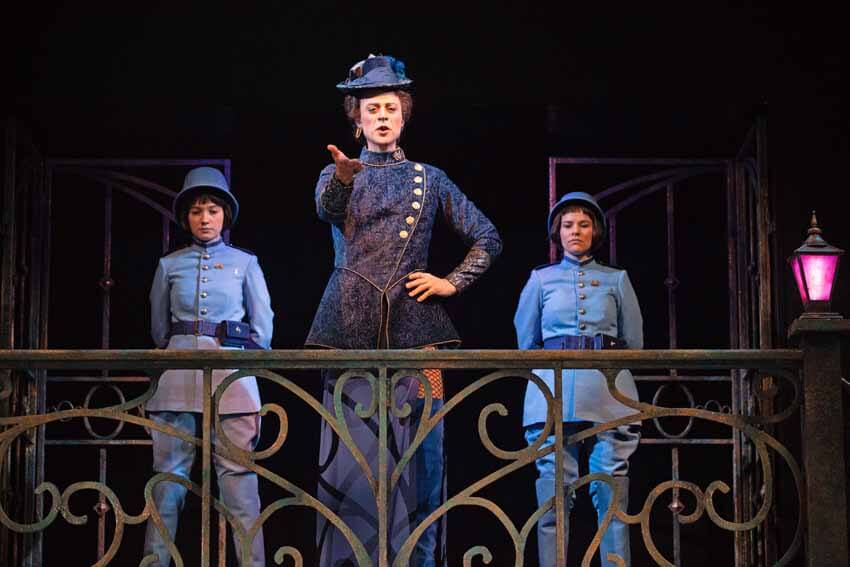 Nothing about the moment calls attention to its strangeness. On the contrary, the choreography of the Duke’s encounter with Gordon Patrick White’s Egeon suggests there is nothing whatsoever strange to note here.

This is Bertolt Brecht, maybe, but with a fresh difference: what is “made strange” in this moment is the very way in which we dominant-culture audience members have been taught to make “others” strangers to ourselves.

Erin: I came to the dress rehearsal eager to see what the actors had made of their characters’ relationships to gender, sexuality, and clothing. In earlier rehearsals, the actors had been grappling with big questions.

Jessica Hill had been wondering if, after seven years of dressing as her brother, Antipholus of Syracuse would have realised that she felt more comfortable identifying as a man. Or maybe she remained a woman, but one who liked the freedom men’s clothes gave her?

Juan Chioran had wondered aloud whether the Duke identified as a woman, or as a man who loved to dress in gender-queer ways.

The long and careful process of thinking through identity was on full display in the dress rehearsal: Chioran’s Duke carried off a long skirt and heels with beautiful confidence while maintaining dutiful order and care of his citizens; Sébastien Heins’s Courtesan strode across the stage an elegant and professional transwoman – she was strong, impressive, and above all never to be taken lightly.

This gender-discovery process is not just a joy to see realized; the care taken in it was also fundamental to realising Loughran’s inclusive vision for Ephesus, and to creating the atmosphere of forgiveness and renewed love carried out in the production’s final moments.

Kim: This “Comedy of Errors” has worked to make the many colours of human being, the many ages of human creativity, and the many expressions of human gender on stage totally accepted, fully “given” in the service of a stage world that perhaps better mirrors our own, circa 2018, than we might at first blush realize.

The pleasures of difference in this Ephesus are taken for granted, because the true pleasure this production finds in Shakespeare’s text is the pleasure of discovering our many, long-lost similarities – not just across our many differences, but also through them. 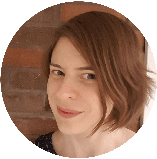 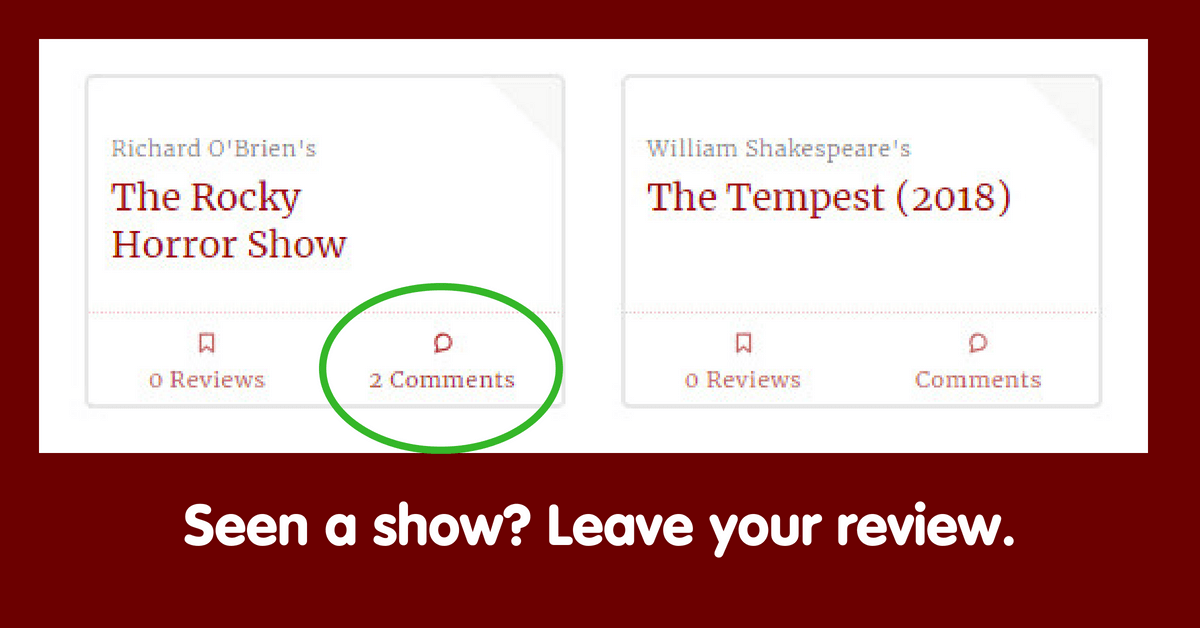 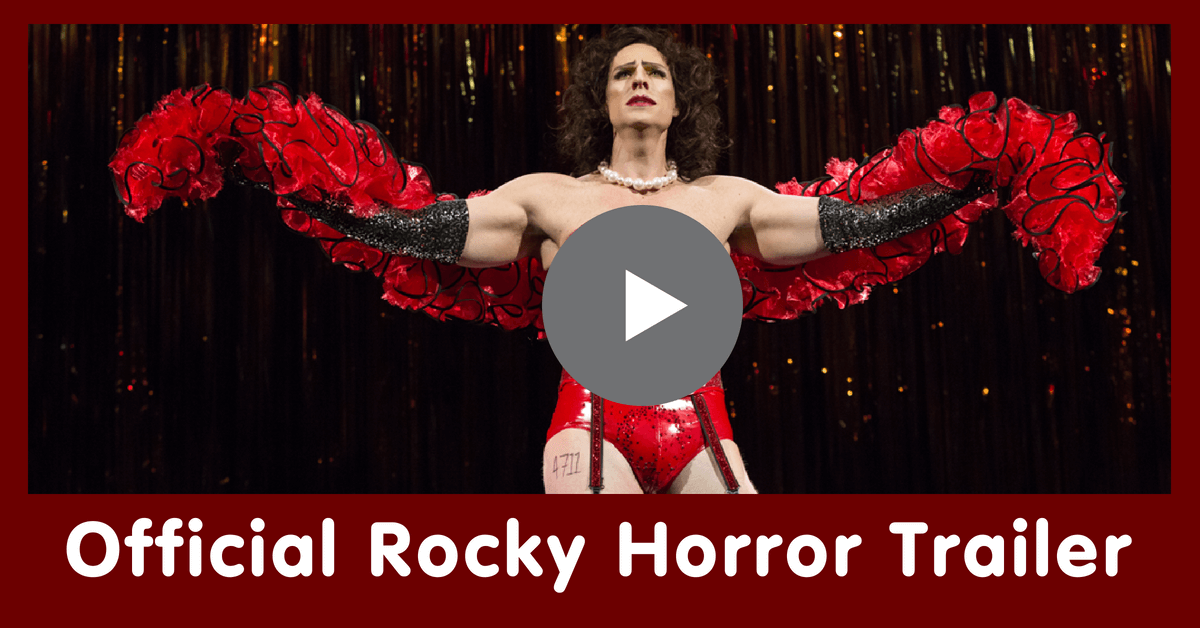 The Comedy of Errors: Building Inclusivity at the Stratford Festival 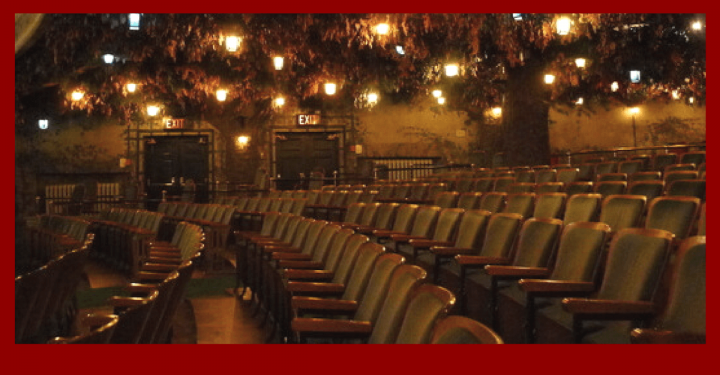