The 2018 playbill is a refreshing mix of internationally renowned titles, the Canadian premiere of a Broadway hit, a comedy from Glencoe, Ontario native Mark Crawford and the return of Huron Country Playhouse favourite Neil Aitchison as the ever-popular Mountie.

“Variety is key next season,” says artistic director Alex Mustakas. “There is something for everyone, from Broadway blockbusters and hilarious comedies to entertaining musical tributes and family fun with our perennially popular summer panto and another beloved Disney classic.”

With attendance at record levels, Drayton Entertainment is extending the Huron Country Playhouse 2018 playbill into the fall season.

Prior to its Broadway run “Holiday Inn” premiered at the Goodspeed Opera House, which is recognized for launching hot shows. 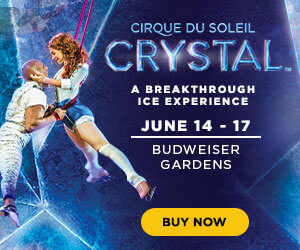 “West Side Story,” (June 7 to June 23) one of the greatest love stories of all time launches the Huron Country Playhouse 2018 season.

Inspired by Shakespeare’s “Romeo and Juliet,” two star-crossed young lovers dream of being together in a world without prejudice in New York City’s Upper West Side during the turbulent 1950s. With music by Leonard Bernstein, lyrics by Stephen Sondheim and choreography by Jerome Robbins audiences will be swept away in this forbidden love story.

“Cruisin Classics,” (June 27 to July 7) a 50s diner revue that promises to tickle your funny bone and touch your heart with classic tunes including “In The Still of the Night,” “Rock Around the Clock,” “It’s My Party” and many more.

Grab your poodle skirt and get ready for a joyous jive down memory lane.

“Canada 151: Better Late Than Sorry,” (July 12 to Aug 4) stars everyone’s favourite Mountie, Neil Aitchison, in a brand new show about what it means to be quintessentially Canadian. The show features music, dance, and Aitchison’s signature comedic spin on national and world events.

“The Little Mermaid” (Aug 9 to Sept 2). A mermaid is given the opportunity to leave her magical underwater kingdom and live on land so she can follow her dream to explore the human world and win the heart of a handsome prince in this faithful retelling of the beloved animated film.

“Holiday Inn,” (Sept 13 to Sept 30) a stunning stage adaptation of the beloved 1942 Bing Crosby and Fred Astaire film. This spectacular four seasons musical about a crooner and a hoofer vying for the affections of an up and coming performer features 20 iconic songs from Irving Berlin’s musical catalogue: “Blue Skies,” “Cheek to Cheek,” “White Christmas” and more.

“Kings & Queens of Country” (June 13 to June 30). This hot ticket full of classic early country music hits played to sold out audiences at the St. Jacobs Schoolhouse Theatre in 2017. Conceived & Directed by Alex Mustakas this new revue, in the tradition of the Grand Ole Opry, pays tribute to the genre’s greatest icons and pioneers: Johnny Cash, Hank Williams, Dolly Parton, Patsy Cline and many more.

Cinderella: The Panto” (July 5 to July 22). The enduring fairy tale gets a clever and contemporary makeover in this glittering stage production that features all the classic elements: the pumpkin, glass slipper, masked ball, plus some unexpected and surprising new twists, along with audience interaction that will have you cheering the heroine and booing the evil stepmother and stepsisters!

“Out of Order,” (July 25 to Aug 11) a classic British farce written by Ray Cooney, has audiences doubled over in laughter as a married government minister heads to a hotel for a secret rendezvous only to discover a dead body in the suite. What follows is a plethora of mishaps, bedlam, and confusion as he tries desperately to save his reputation.

“The Birds and The Bees.” (Aug 15 to Sept 1). Mark Crawford’s comedy features a separated turkey farmer who moves in with her mother, a divorced beekeeper. A strapping young grad student studying the bee population arrives in town as the women look to put their lives back together. With a meddlesome neighbour, internet dating, and the annual Turkey Days Dance it’s inevitable that lust and poultry collide in this hilarious comedy about chance encounters and fresh starts.