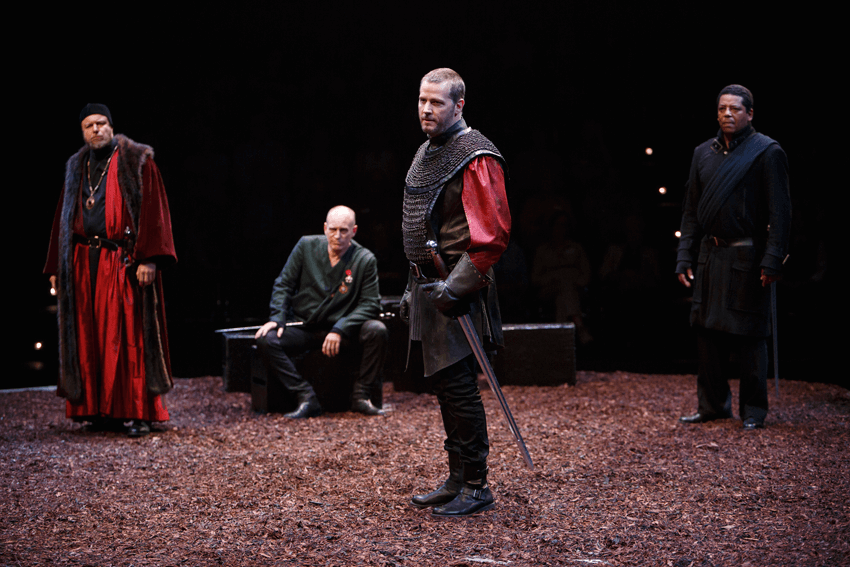 Stratford’s “Breath of Kings” is not the flashiest item on Stratford’s 2016 playbill.

A two-part adaptation of the four-play Henriad cycle, this is the kind of nitty-gritty Shakespeare that Stratford often stages at the Tom Patterson Theatre, banking on committed Shakespearean nerds to fill the roughly 500 seats.

Those who don’t consider themselves Shakespeare aficionados are likely to hear the words “history plays” and bolt down the road to the Festival Theatre to enjoy a musical or some more “mainstream” Shakespeare.

There is a whole lot that is enjoyable, interesting, and important about these two plays – more than enough to dedicate six hours of your time. Here are just a few…

Stratford’s “Breath of Kings” tells the sweeping tale of three monarchs, their noble enemies and allies, their colourful friends, and the people whose lives are affected by their intrigues; but the people behind the scenes are just as fascinating.

The two-part production was conceived and adapted by Festival favourite Graham Abbey, who also served as associate director. Abbey was drawn from law to acting after a melanoma diagnosis at a young age (the stuff of plays itself) and became a preeminent Shakespearean actor ( The Toronto Star). He has been acting at the Festival for 17 seasons, and is the founder and Artistic Director of the Groundling Theatre. 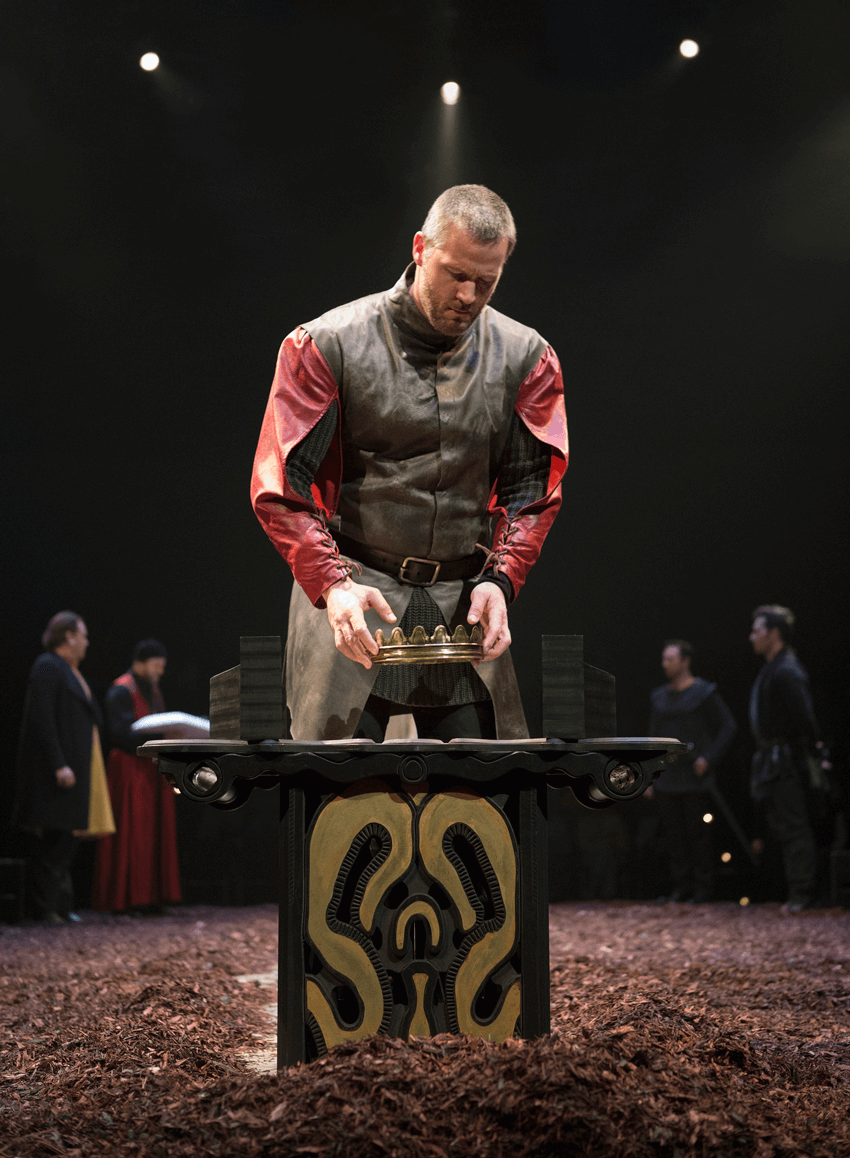 Abbey’s idea has been brought to life by co-directors Weyni Mengesha and Mitchell Cushman.

Cushman, now in his 4th season at the Festival, is an award-winning director and Founding Artistic Director of Outside the March Theatre Company. He is also the son of National Post theatre critic Robert Cushman.

Returning for her second Stratford season, Weyni Mengesha is a Dora-nominated director who has led such acclaimed productions as “Kim’s Convenience” and “‘Da Kink in My Hair.” She is also the cousin of Araya Mengesha, who plays Henry V in “Breath of Kings.” Both are great-grandchildren of Emperor Haile Selassie, the last Emperor of Ethiopia (for more on that fascinating connection, see this short but enlightening CBC video).

For the first time in its thirty-year history, the Tom Patterson theatre has been transformed into a theatre in the round, with seating on all sides. In my opinion it is better for it.

Gone are the days of craning your neck from the “cheap seats” to see the backdrop that was just beyond your view. Now every seat in the house has the intimate feel that the Tom Patterson has always encouraged.

The staging of “Breath of Kings” is particularly fascinating, making use of mulch and moveable stone slabs to bring the surrounding audience from great halls, to brothels, to gory battlefields. 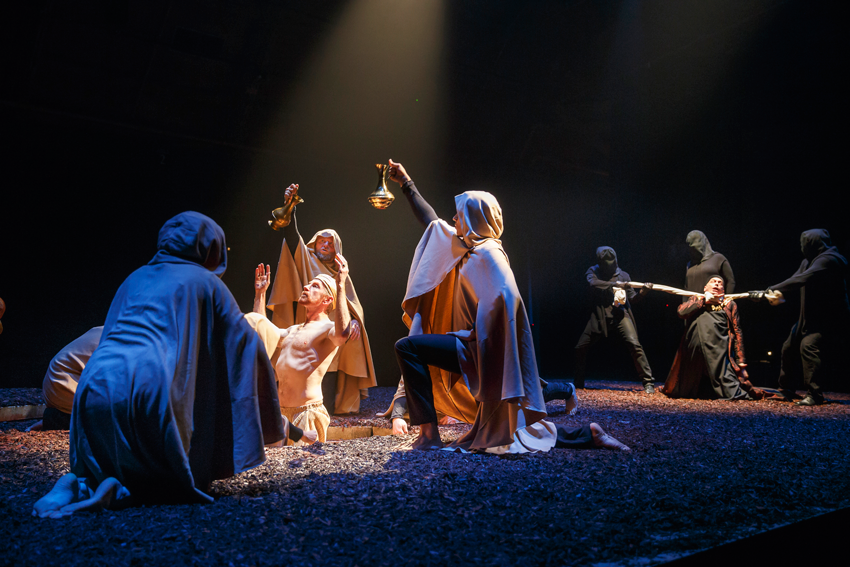 Graham Abbey first began to conceive of “Breath of Kings,” a two-part adaptation of Shakespeare’s Henriad cycle (Richard II, Henry IV: Part I, Henry IV: Part II, and Henry V) on September 11, 2001. The incredible story of his drive back to Stratford from New York state in time to take solace in a cathartic performance of Henry V (outlined in the program) is enough to convince anyone that six hours of history in Shakespearean verse is not only a relevant, but an essential, feat.

Those six hours are made all the more powerful by the fact that they were once twelve. It is not easy to sit through four history plays in a row, even if you can find a theatre company undertaking that particular feat. The four plays in the cycle are often performed individually (particularly Henry V, which Stratford last produced in 2012), but they suffer for it.

Condensing all four plays into two brings into sharp relief the complex relationships that run through the cycle, clarifying the often-complicated plot and heightening the emotional stakes.

The two plays in “Breath of Kings” feature a cast of 18 actors playing multiple roles. Actors at repertory theatre companies like Stratford are no strangers to multi-tasking, but it is something special to see them tackle multiple, wide-ranging roles over the course of two linked plays. Actor and playwright Kate Hennig, for example, plays a bishop, a Duchess, a soldier, and the loveable innkeeper Mistress Quickly.

The multi-tasking cast includes both Stratford veterans and talented newcomers. The great Geraint Wyn Davies, for example, takes on the famous comic role of Falstaff and that of Fluellen, a captain from Davies’ native Wales; he seems born to play both. 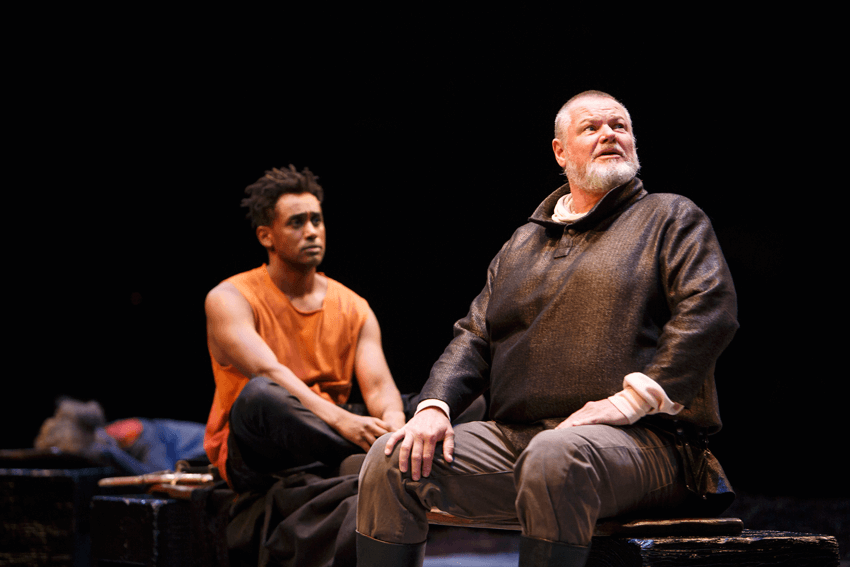 Newcomer Araya Mengesha embarks on his second season at Stratford with a strong performance as Prince Hal/Henry V. He is the first actor of colour to play a Shakespearean king at the Stratford Festival (CBC). 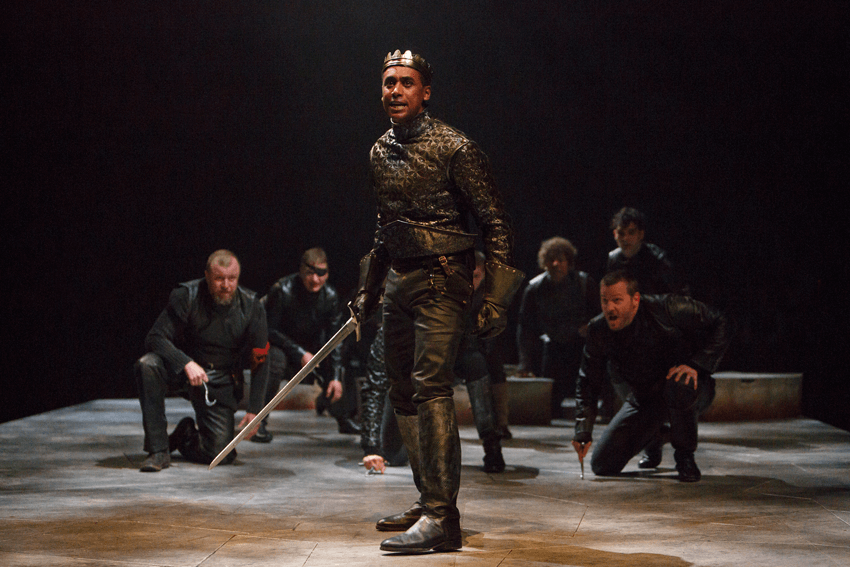 Araya Mengesha as King Henry V with members of the company in “Breath of Kings: Redemption.” Photography by David Hou.

Continuing to break with tradition, Stratford’s “Breath of Kings” also features a good deal of gender-bending. No fuss is made of this pratice in the show’s promotion or even program notes, but a good number of women play male roles, from a lowly soldier to the Dauphin. Personally I am a big proponent of this kind of casual gender-bending, which seems to say “These are actors playing parts, their gender is of no concern. Now move along, we’ve got a show to put on.”

While “Breath of Kings” takes the stage in Stratford, “The James Plays,” a three-play cycle of Scottish Kings, is playing at the Luminato Festival in Toronto. Meanwhile “Game of Thrones,” to which The James Plays have often been compared, is wrapping up its sixth season of royal feuding, and battling monarchs continue to populate the big and small screens. 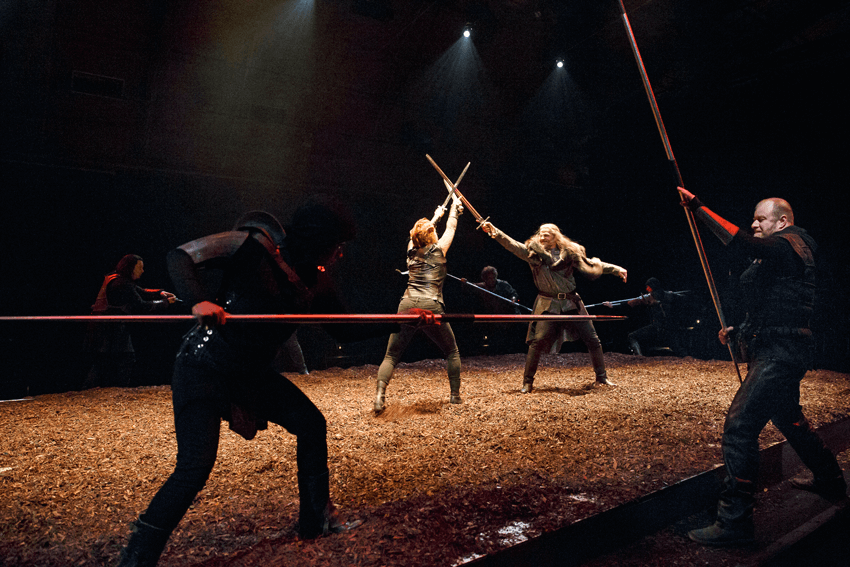 Clearly there is something about stories of sword-wielding kings that captures our collective imagination.

In the Directors’ notes, Mengesha and Cushman draw an apt connection between Shakespeare’s monarchs and our most recent leaders, from Trudeau, to the Koch brothers, to Mengesha’s great-grandfather. These leaders and our contemporary society continue to struggle with the same issues of love, duty, honour, political power and war that run through the Henriad cycle (and for which Shakespeare, too, had no clear answers).

401 years after Shakespeare’s birth, and 601 after Henry V’s famous victory at Agincourt, Shakespeare’s histories feel as relevant as ever, and well worth six hours of your time.