Chilina Kennedy is performing again in Toronto and I’m so glad Suzie and I attended the opening night of her short run in “Beautiful: the Carole King Musical.”

The Broadway star is only in Toronto until May 5th, at which time she returns to play Carole King on Broadway. Toronto’s gain is Broadway’s loss.

Before performing on Broadway Kennedy studied at Sheridan College and performed at the Stratford and Shaw Festivals.

When the Kennedy Center Honors paid tribute to Carole King it was Chilina Kennedy who was front and centre at the piano. 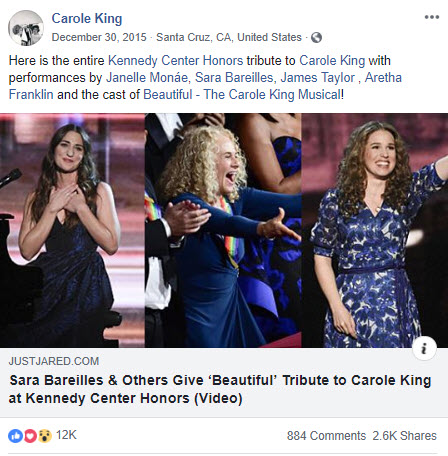 She’s been a guest on my podcast twice and recently I had the chance to catch up with her here in Toronto.

1) Much like Carole King you are an inspiring, powerful woman and mother who writes original work. How has this show changed your life?

Thank you! Carole has inspired me in many ways – she’s a positive and loving role model who has a glass half full view of the world. Her bravery in her career while also being committed to motherhood is unique and really motivating. Women often feel like they have to choose between family and career, especially in our industry but Carole proves that we don’t have to.

2) How does it feel to be back on stage in Toronto and are there any moments in the show where the Toronto audiences react differently than the Broadway crowd?

It’s wonderful to be home! Yes, there are a few specific differences in reactions between Toronto audiences and New York audiences – ones that feel personal and others are obvious cultural examples like the Brooklyn and New Jersey references. But both Canadian and New York audiences love the show very much and are inspired every night, as I continue to be! 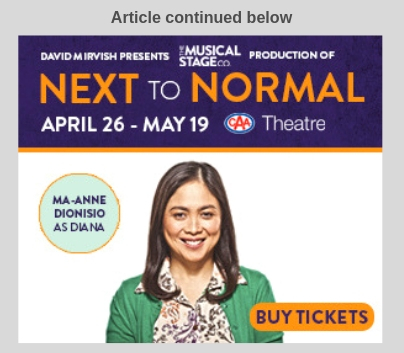 3) Since taking on the role, you’ve spent time with Carole King, James Taylor and Aretha Franklin, just to name a few. What have you learned from them that you will pass onto the next generation?

I have learned a big lesson in humility and kindness. The greatest and biggest stars I’ve had the good fortune to meet all floored me with their respectful attitude, both towards other people and toward the work we do and the music we have the privilege to make.

4) You’re working with Rick Fox (Stratford Festival Director of Music 2008-2013) on a new musical ‘Call It Love’ based on your solo album, ‘What You Find in a Bottle.’ How long before your fans here will get a glimpse of it?

Yes! I have rewritten a lot of my material from the album and have added new songs for the most recent reading of ‘Call It Love.’ I co-wrote the book with Eric Holmes (‘The Good Fight’), and Rick Fox has done spectacular arrangements. Fans will hopefully get a glimpse soon! They can follow us on Instagram @callitlovemusical and check out our news at eclipsetheatre.ca

5) Where do you see yourself, in over a decade from now, when your son leaves the nest?

I’d love to be writing more and directing more. Also, I have a desire to do more film and TV.

6) The tennis champion Billie Jean King once said: “Ever since that day when I was 11 years old, and I wasn’t allowed in a photo because I wasn’t wearing a tennis skirt, I knew that I wanted to change the sport.”
What’s one thing you would like to see change in show business?

I’d like to see it become much more affordable. Creating theatre is very expensive, and now ticket prices have skyrocketed. We need to find a way to be able to create great theatre at a more reasonable cost.

Pick 1 and reply with a sentence or 2.

Pen and paper or Keyboard?
Pen and paper. I’m old fashioned and I remember things better when I wrote them down.

Caffeine or no Caffeine?
Caffeine!!!!!!

Use the discount code BEAUTY89 to save 40% on tickets.

Simply click the link above and enter the promo code BEAUTY89. You can get Orchestra seats for $89.00! That wouldn’t get you a seat in the back row to see Chilina on Broadway!