At the Grand Theatre this December, audiences will witness a very significant production of “A Christmas Carol.” This will be the Grand’s first production directed by the company’s new artistic director Dennis Garnhum. It is a homecoming for Garnhum, who is returning back to the stage where he began his career. Garnhum’s love for the Grand is so evident, audiences can expect to see a production with the spectacle and panache that fits his love for this theatre.

If you look around the country, there are countless productions of “A Christmas Carol” staged every year. Each production is unique reflecting the vision of company and artists behind the work. The variety is evident from Soulpepper’s ghost story focused version, to Ross Petty’s Panto version to Tim Carroll’s playful new Shaw Festival production which employs puppets, shadow puppets, and a life-sized advent calendar, and out at Theatre New Brunswick, where the company is taking a gender-bending approach with Nora McLellan playing Scrooge.

If you had the time and good weather I think traveling the country to see as many different “Christmas Carols” would be a great way to spend December.

It makes sense that “A Christmas Carol” is the literary work that is probably the most frequently adapted for a stage. The story, though not originally a play, is inherently theatrical.

In fact, Dickens himself was the first person to adapt his story for live performance. Along with being a writer Dickens had a career as an orator and performed a shortened version of “A Christmas Carol” as a solo performance. Dickens did not use any costume or props but accounts say that he invested himself heavily in performing each of the characters with distinct voices and physical characteristics. 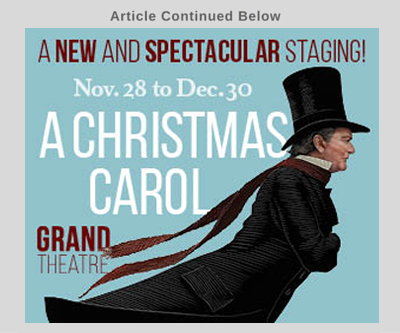 The closest one may come to seeing what Dickens’ performance was like would be by seeing the great Canadian performer, and someone who carries on the orator tradition, John D. Huston’s solo performance of “A Christmas Carol.”

So what makes “A Christmas Carol” so fit for the stage? It is a story about change.

In the theatre we go to watch transformations, metamorphoses, we want to see characters who by the end of the play are different than they were at the beginning. In “A Christmas Carol” we see a most amazing transformation in Scrooge.

We Want to Become Better

The action of the play is focused on his change. Not many people are given the chance to look their life square in the eyes, take stock of it and then change accordingly.

What Scrooge goes through is a spiritual rite. We as the audience are watching a man live, die and be born again as new loving being.

It is not just Scrooge is who goes through a great transformation in “A Christmas Carol.” Once, at a one night event, I read the role of Fred, Scrooge’s nephew, before then I had never paid much attention to Fred.

What I realized from playing him just that one time was that Fred has a deep desire in his heart. He so wants his Uncle Scrooge to be part of his life. He is looking for a mentor, a connection to his elder family. He gets his wish by the end of the play when Scrooge comes to Fred’s Christmas. That is a powerful and sometimes unnoticed moment, the reunion of nephew and uncle.

As well when you look at the Cratchit Family, while Bob keeps on a brave face, many of the other members of the family are feeling very depressed in the face of their poverty and Tiny Tim’s illness. They as well as a family are changed by the end of the story. This journey in “A Christmas Carol” that is the experience of Christmas, or of wintertime, that we all share.

We enter into the darkest time of the year, and we celebrate through the cold long nights, and in the midst of the celebration we find ourselves at a time of introspection we consider who we are and how we want to become better. Then we exit that dark night a new person, like Scrooge and relish all the life and humanity before us. It is a bit like going to the theatre too; We enter into the dark and we come out afterwards changed.

Don’t miss this podcast with Cyrus Lane who plays Scrooge in the Ross Petty pantomime “A Christmas Carol the Family Musical with a Scrooge Loose” at Toronto’s Elgin Theatre.

A Christmas Carol: A Story Meant for the Stage