“Fiddler’s story of tensions between adapting and assimilation, tradition and change – and how there never really is a single, right choice – is one that resonates strongly in a Canadian context. The multicultural cast of Jews and Russians at Stratford with their diversity of accents only emphasizes the universality of the tale.”

Deeply devoted to god and his daughters

As Tevye Scott Wentworth plays “not for us… but for an audience of himself, and his God…Tevye is deeply devoted to his daughters (like Job before him), and Wentworth gets a great deal of support from all of his three eldest…Jennifer Stewart, Jacquelyn French and Keely Hutton.

Light amongst a dark historical backdrop

Reid reminds us that “Fiddler gains depth as a musical because of its literary foundation against a deeply troubling historical backdrop….Feore doesn’t shy away from the theme of anti-Semitism, but…doesn’t allow darkness to usurp the light.”

Forget any Fiddler on the Roof you...

Ouzounian enjoyed just about every aspect of Stratford’s “Fiddler on the Roof”, which he stated is “done to perfection”. Along with the direction, he praises “the brilliantly brooding shadows of Michael Walton’s lighting”, and the comedic performances of Jones, Ross, Kushiner, and Markus.

Coulbourn praises the show overall, but notes “Where Tevye spend his days talking to God, [Scott] Wentworth instead spends much of his time talking to his audience, like a time-travelling Jackie Mason set loose in the Borscht Belt of the Urals.”

“The directors fully understand the percussive potential of snapping fingers and stomping feet, and have their cast utilizing these whenever possible, moving the audience to snap and clap along. One audience member, sitting close by this reviewer, even caught himself singing along to If I Were a Rich Man at one point, and, really, who could blame him?”

“Great pain has gone into the historical and cultural accuracy of the production. Most recognizable is the traditional Jewish wedding re-enacted to the smallest detail. Also outstanding historically and visually are the exciting dances, especially the breath-taking Russian numbers and the original choreography to the Bottle Dance.”

Slotkin states “You cannot do a Jerome Robbins musical without adhering exactly to the Jerome Robbins choreography according to the dictates of his estate.” She notes director “Feore has been true to Robbins’ rousing choreography but she goes further than that and has her gifted company of dancers and actors instil the passion and zest for life of all of them into the show.”

Smith notes that as with many productions of “Fiddler on the Roof,” “There’s no one correct Tevye, Golde or even Yente the Matchmaker…At Stratford, Wentworth explores a gruffer, less warm vision of the man. Yet when he cries for his lost daughter, Chava, marrying outside the faith, you cry with him.”

“Director Donna Feore does a masterful job of balancing all the humour and emotion….There are no weak performances in this production. None.”

A surefire hit to the end

“Not a moment is wasted in this eye-catching, pulse-racing production. Feore and a first-rate company of actors, singers, dancers and musicians keep the audience spell-bound. The Stratford Festival retains its preeminence in the production of quality musical theatre.”

“Director Donna Feore adhered closely to the spirit and style of the original 1964 Jerome Robbins presentation in this production of Fiddler. She made no attempt to ‘make it different’ simply to be different. It appeared to be enough for her to remain faithful to the original concept, and strive to be worthy of it.”

Feore’s production was “much warmer, richer and thus more rewarding” than the last version of “Fiddler on the Roof” at Stratford. Godfrey’s review singles out Feore’s use of the play’s traditions and colour.

“Credit goes to director-choreographer Donna Feore for taking full advantage of the great story, and making it relevant today. She has brought together the 1905 stories with the 1964 Broadway opening and the 1971 movie, and made it all work in 2013…The choreography is amazing in all regards. The Russian Cossack dance scene in the bar room has great energy.”

Hoile loved Feore’s “Fiddler on the Roof”. However, he found “With Wentworth, there’s a versatile central showman but no emotional core.” He believed Stewart, French, and Hutton “beautifully acted and sung” in their performances, and called French’s “the most compelling”.

Not one false note

“This is a production of Fiddler on the Roof worth treasuring; I hope they film it…There is not one false note: no obvious joking or exaggerations, no easy or corny laughs, no tricks or virtuosic movement for its own sake, but clearly exemplary virtuosity…”

Sure to dazzle audiences of all ages

Gienow states the musical “is relatable to all who experience it because at its core, it is about the struggles that any family and community can and do face everyday.” She notes the cast “excels in this moving production, leaving not a dry eye in the room.” 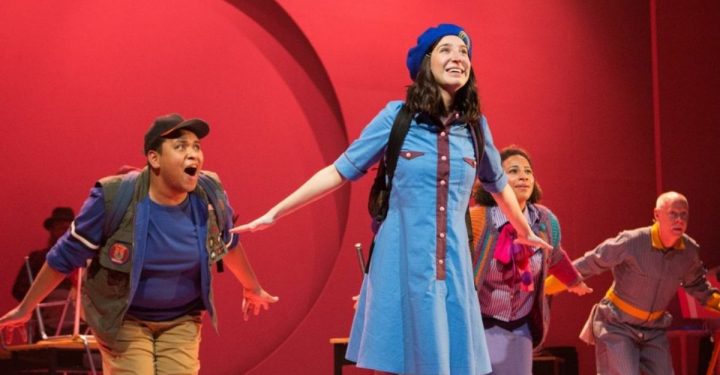