Their version of “Othello” by Richard Appignanesi and Ryuta Osada is just one of many in the series. 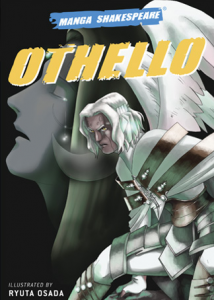 Osada draws the characters, except for Iago, with either animalistic or fantastical features- just a few common physical traits for characters in manga. The design of the characters reflects their personality or situation.

Othello is drawn as the only angel in the adaptation.

Although angels symbolize innocence, Othello is questioned about his relationship with his wife Desdemona by The Duke of Venice. 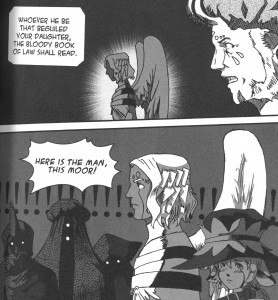 Depicting Othello as an angel throughout the story, even after Iago’s plan, leads him to murder Desdemona, represents his innocent nature.

Casio and Bianca have the ears, tails and facial features of puppies, symbolizing their playful relationship.

Their interactions are like slapstick comedy, adding humour to “Othello”. Bianca throwing Desdemona’s handkerchief in Casio’s face is a comedic way to introduce the tragic conclusion. 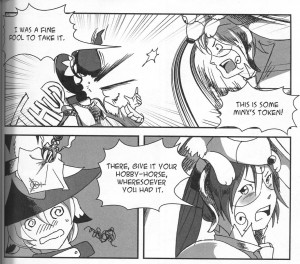 In my article about the “Romeo and Juliet” graphic novel adaptations, I introduced chibis; miniature versions of the characters with exaggerated facial expressions to convey humour in serious situations. 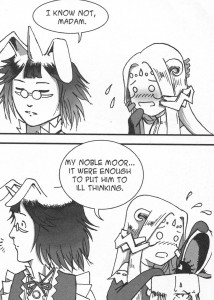 Like the “Romeo and Juliet” manga, this version of “Othello” includes chibi characters just before the play becomes tragic.

Manga Shakespeare’s “Othello” depicts Desdemona’s murder scene with a close up of Othello’s hands around her neck. Her pleas to live go unanswered.

Othello utters “it is too late” which is depicted over a panel that fades to black, just as Desdemona’s life fades to an end . 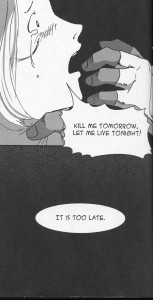 After thinking about the image more, and considering the simple depiction of the gruesome scene, to me the image is just as intimidating and frightening as those I’ve seen on stage.

This unique presentation of Shakespeare’s play introduces a new way to interact with his work using manga conventions.

Read the reviews of Stratford’s “Othello”, or post your own, on Stratford Festival Reviews.

Visit here for more information on “Othello” at the Stratford Festival.

Manga Shakespeare’s “Othello” can be purchased at the online Stratford Festival Store by clicking here.