Pete Townshend, of The Who, recently appeared onstage at the Stratford Festival, taking a bow with the cast of Tommy. 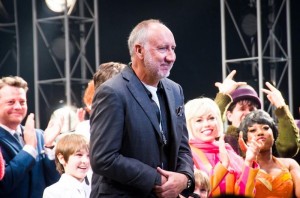 While in town Townshend recorded an interview for CBC Radio’s Q with Jian Ghomeshi, scroll down for the full audio interview.

Guests of the May 15th performance of “Tommy”, inspired by The Who’s renowned 1969 concept album of the same name, were treated to a surprise curtain call by the band’s lead guitarist and songwriter. Townshend wrote the music and lyrics for the show. The book is by Townshend and Des McAnuff, who’s directing the Stratford production.

Here’s a video of Stratford’s Tommy

Townshend’s visit generated a lot of activity on social media. The buzz began on Twitter.

The appearance also generated heavy traffic on Facebook, where a photograph of Townsend with the cast had over 700 likes and more than 600 shares on Stratford Festival’s page. 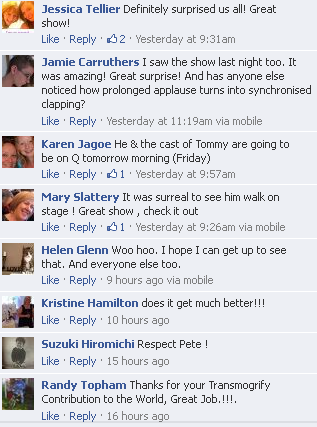 Friday, Townsend, along with the cast of “Tommy” and director Des McAnuff, appeared with Jian Gomeshi on CBC Radio’s Q. Here’s the feature interview with Townshend.

A film adaptation of Tommy was released in 1975 by Ken Russell, prior to its debut on Broadway in 1993.

The production will run in Stratford until October 30th.

Once the show opens read all the reviews, or post your own now, on Stratford Festival Reviews

Pete Townshend discusses The Who’s Tommy from the Stratford Festival