One of those shows, “The Tempest Replica” from choreographer Crystal Pite, is at Kitchener’s Centre in the Square March 25th. 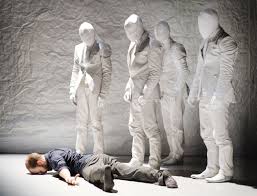 “The demands of being an in-demand choreographer were getting to Crystal Pite, who took the ending of her company’s residency with Frankfurt’s Kunstlerhaus Mousonturm (a relationship that granted Kidd Pivot $500,000 in annual funding) as a cue to take a sabbatical. Anticipating a year of professional development where she would fill up with other art, Pite instead recharged her lithe batteries mostly by spending time with her son Niko, now 3, with whom she’d been touring since he was 7 weeks old.

“I wanted to go home. I wanted to cook in my own kitchen and take him to art class and the playground and just really experience that with him,” she says from the rehearsal hall.

She returned to the studio a month ago, where she has been making changes to her 2011 work The Tempest Replica – which Pite describes as a “very fussy, delicate show.”

The work, which premiered in Frankfurt in 2011, was a departure for Pite, who has a contemporary dancer’s aversion to narrative, and who sees dance as an inefficient way to tell a story. But she gave herself the challenge of working with an existing script and developed a performance that tells Shakespeare’s stormy tale in two different ways, using projected text to aid the exposition.”

Shakespeare’s The Tempest in dance comes to Kitchener