Gallery Stratford was buzzing Sunday for the opening of two new exhibitions. 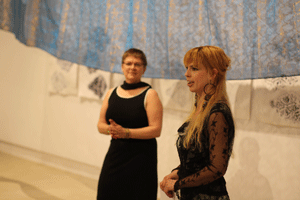 Gallery Stratford Director & Curator Aidan Ware introduced Carolyn Riddell who spoke about her travels to India and Turkey. Her first trip to Turkey was in 1986. 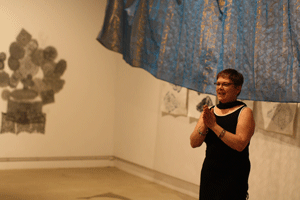 Riddell says she fell in love with Turkey and has returned 25 times since that fateful first visit. Riddell’s multimedia installation evoked mixed feelings for me. 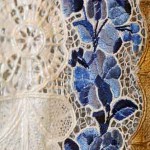 Through the acts of stitching, tying/untying, layering, and fusing, Riddell offers both the physical and the psychological raw footage of her intense journeys. Her painstakingly detailed work conjured thoughts of labour exploitation, prevalent in certain regions, in the production of commercial woven goods. 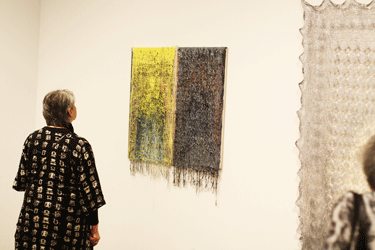 “Train Dreams” is an experimental multimedia installation that examines the nature of memory and time through railway culture. 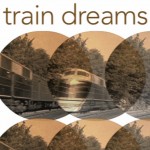 It’s a multimedia exhibit, mixing archival and new photography with sounds and video. It takes the viewer for a ride deep into the past, when railroads were a dominant form of transport. Archival footage juxtaposed with contemporary images of abandoned, eroding railway buildings, highlight a shift in Western society’s regard for railway technology and transportation.

Nick Kuepfer performed at the Gallery Stratford opening. Kuepfer is a guitar player who weaves guitar with live-sampled tape loops. His revolving loops of ferric oxide complemented projections of revolving locomotive wheels and railway lines comprised of iron and steel. 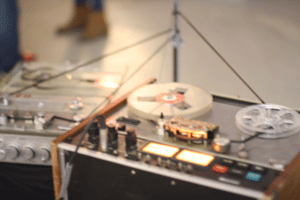 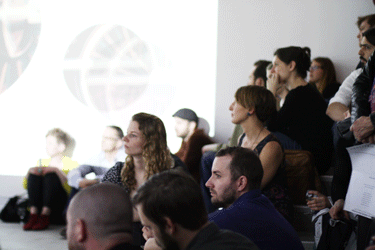 The Gallery Stratford crowd sat transfixed by Kuepfer’s performance. The exhibits are a fine pairing, exploring the intersection of travel, memory, the past and the present.