Following its premiere at Theatre Calgary in September 2018, the second production of Tara Beagan’s “Honour Beat” opens on the Spriet Stage at London’s Grand Theatre.

The play tells the story of sisters Anna-Rae (Andrea Menard) and Rae-Anna (Tracey Nepinak) as they process the imminent death of their Mom (Tai Grauman) from her bedside in a Toronto hospital. As their inverse names suggest, the sisters are opposites. Anna, the eldest, owns a yoga studio in Toronto and has a reputation for casual dating while her younger sister Rae settled down in Vancouver with her husband and two daughters.

Their mother’s nurse practitioner, Spanish (Nicholas Nahwegahbow) attempts to navigate his personal relationship with Anna, Rae’s initial hostility toward him, and the sombre professional task of caring for his terminally ill patient, Mom.

What unfolds in the play’s single, ninety-minute act is a deeply moving, multi-faceted story about familial love, spirituality, and death set against the backdrop of the complex relationship between Indigenous peoples and settlers in Canada.

Though Mom is in a coma in her final hours of life, her spirit is as lively as ever. She converses with Anna throughout the play, but Rae and Spanish can’t see or hear her. Mom comments on much of what happens at her bedside and tells Anna stories from their family’s past: the story about the residential school where Mom met Anna’s dad; the story of how the family lost Rae’s father; the story of the girls’ maternal grandmother and grandfather.

As the production’s cultural consultant Summer Bressette points out, such histories are often silenced in schools meaning Indigenous history, culture, and language live on predominantly through story.

“Honour Beat” is not just about the stories themselves, however. The show also points to the way stories are told.

Striking is Beagan’s use of indirect communication, especially between Rae and Mom. Rae can’t speak to her mother like Anna can, but during several scenes Mom and Rae talk in turn, as if in dialogue. Even though Rae doesn’t hear the words Mom says, there is a clear emotional connection between the characters. Rae cannot hear Mom’s voice, but she doesn’t have to; her mother resonates more deeply than sound.
Notable, too, are scenes where dialogue is purposefully hard to follow.

The set has two scenes, Mom’s hospital room on stage right and a small courtyard with a cedar tree on stage left. In several scenes, conversations take place on both halves of the stage simultaneously. Though the characters don’t talk over one another, the threads of the conversations are hard to keep track of. So, too, is the family history itself. Anna and Rae have different fathers whose complex stories are hard told as the play progresses.

These moments of difficulty are by no means a detriment to the show. Beagan carefully unravels the tangled stories of her characters with a fierce fidelity to the family at the heart of “Honour Beat.”
Familial relationships are the heart of the show, but the play points to a wider history of cultural genocide and intergenerational trauma that Indigenous peoples experience at the hands of settler institutions – and here I am cognizant of my own position as a settler scholar of European descent.

Footage from the residential school system is projected onto the stage during a particularly emotional scene where Mom, initially the storyteller, is consumed by the narrative she conveys. Importantly this moment is not about victimhood, but about Mom’s strength as a survivor. The scene also demonstrates Beagan’s “commitment to honesty, valuing an outspoken way of being, and the ongoing prioritization of Indigenous agency when telling [Indigenous] peoples’ stories.”

As Mom, Grauman embodies the wisdom of youth and the liberation from a body scarred by her experience in life. Grauman is as tenacious as she is playful, visually young but with the air of a proud maternal figure.

She is joined by literary icon Lee Maracle who plays Mom in video form, Rae having filmed a conversation with her mother months before the story begins. The stark visible difference between Grauman and Maracle is bridged by their shared playful energy, leaving no doubt that they embody the same character.

The sisterly banter between Menard’s Anna and Nepinak’s Rae is convincing. Their individual loyalty to their mother leads to constant nitpicking, jealousy, and tension that the two must ultimately work through together.

As a nurse practitioner, Nahwegahbow’s Spanish is professional and profoundly dedicated to his patient, Mom. He is also committed to connecting to Rae, who has trouble seeing past his role as Anna’s boyfriend to consider him as their mother’s nurse.

The talented cast is joined behind the scenes by a production crew composed predominantly of women, fitting for the sense of feminine strength which underscores the show. Set design by Tamara Marie Kucheran is simple, but intimate, and the final scene transformation is breathtaking.

Beagan’s “Honour Beat” is a powerful homage to Indigenous history and voices while continuing the important work of storytelling itself. 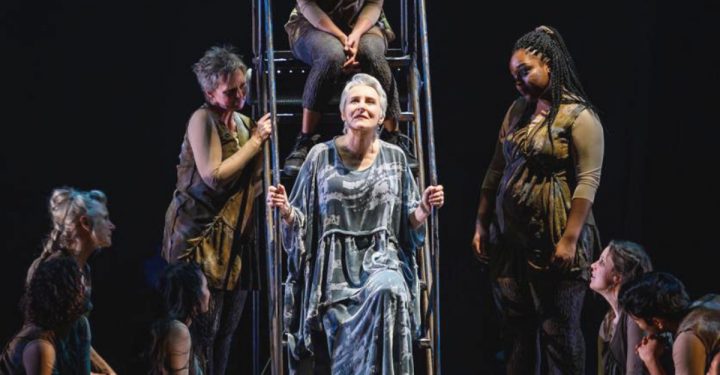 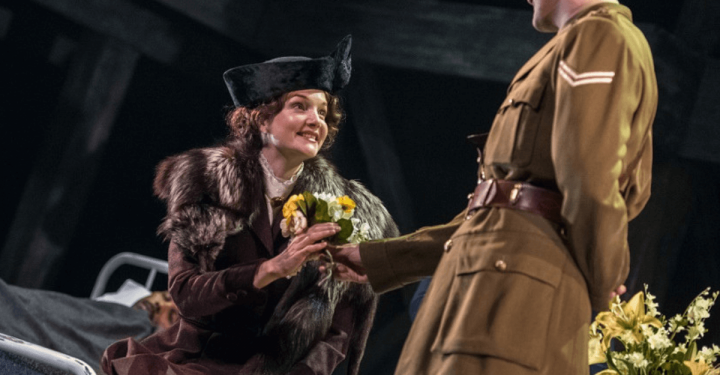