When Chris Abraham agreed to a directorial position at Bard on the Beach, his main desire was to unpack Shakespeare’s “Macbeth” and reveal the meaning at the core of the tragic text.

Why do good people do terrible things?

Abraham defines the play as one of the key generative texts in terms of crime storytelling. Shakespeare, coupled with a recent induction into the intriguing world of real crime by Torquil Campbell, had sparked Abraham’s interest in uncovering the hidden truths behind human descent into depravity. Bard on the Beach’s production of “Macbeth” gave Abraham the perfect opportunity to detect Shakespeare’s work and uncover the catalysts behind moral corruption, deception and death.

What would cause a good man to resort to murder? Why was Shakespeare’s tragedy steeped in so much suffering? Abraham and I mulled over these questions during a phone interview one recent afternoon.

Abraham set his production in Shakespeare’s time with a simple Elizabethan approach to the stage (limited props, no change of location, and a strong reliance on the text). As he explained, “I wanted to grapple with the scenes and how this very linear, in my opinion, perfectly constructed causal play developed scene by scene… I wanted the audience to experience the beauty of the play’s construction and the extraordinarily innovative use of language.” 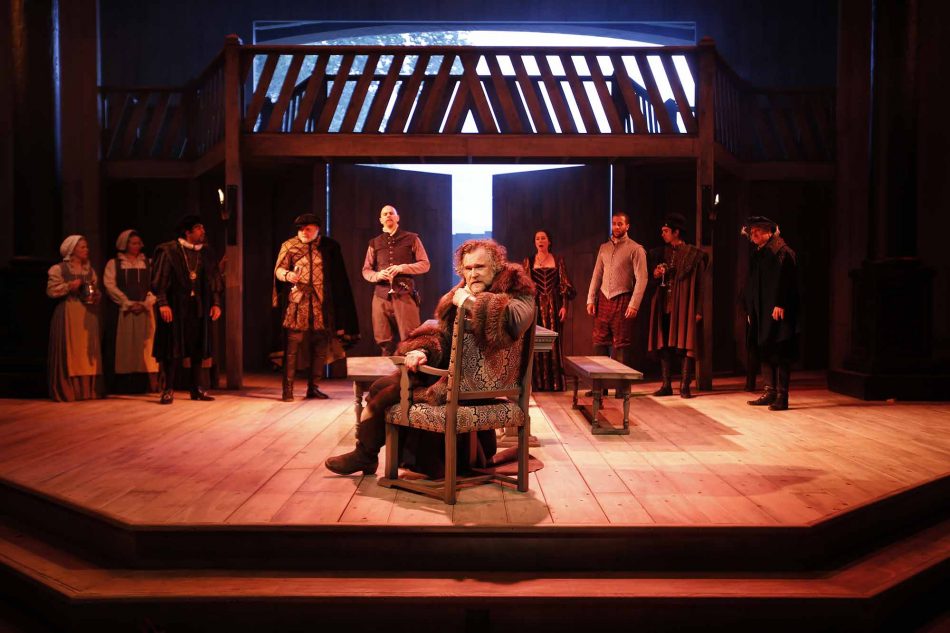 Abraham also wanted to tackle the substantial overarching questions behind the corruption of good people, destruction and morality, “and how this play creates a kind of complicity between its protagonist and the audience as they go down the rabbit hole.”

Having worked with both Moya O’Connell and Ben Carlson before was a perk for Abraham as it provided him with a strong couple as Lady Macbeth and Macbeth. As Abraham observed, the play demands the best talent, “You don’t choose to pursue Macbeth unless you have your mister and lady. O’Connell and Carlson had wanted to work together for a long time, so they were a huge draw for me. The play, which is so demanding for principal performers, requires actors who are tremendously versatile, muscular, great speakers of the language, and willing to take risks with each other.” 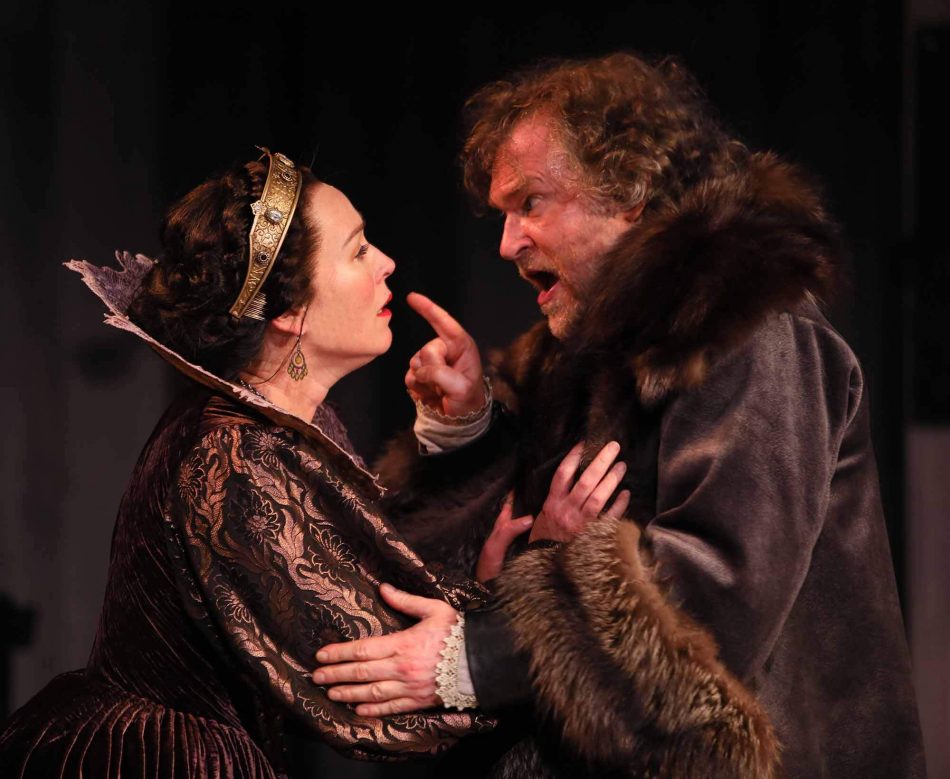 The cast and crew unearthed a play with deep roots in suffering, an imbalance of power, patriarchal destruction, and a circle of mourning women. The broken systems of power and authority created death and destruction throughout the text. Abraham latched onto this theme of cyclical suffering and causal effects, opening his production with a violent scene of war and a woman crying on stage. Her mourning transforms into the laughing cackles of a witch who will later tempt Macbeth with a promise of power.

The text also hints that Lady Macbeth has lost a child, and Abraham uses her suffering as the starting point for continued tragedy throughout. There is an absence, an underlying trauma that places both Macbeth and Lady Macbeth in an ideal position for manipulation. The loss and pain of the women in “Macbeth” (Lady Macbeth, the witches, Lady Macduff), who are stuck in a patriarchal system of abuse and silence, perpetuates more grief and suffering: “all of the women in the play are victims of a war machine and a hierarchal system rooted in patriarchy” says Abraham.

Lady Macbeth (O’Connell) manipulates her husband out of a desire to reclaim meaning and purpose in their lives. Yet, to succeed, she must “unsex herself,” sacrifice her female conscience and join with a traditionally male power. Out of the loss of a child and the stagnation of marriage, she clings to a prophecy that could give her purpose while also restoring her husband and his manhood.

Abraham noted that the play questions what it means to be a man, connecting manhood to violence and physical action. Macbeth’s “manhood is tied to his ability, his willingness to do murder.” “Macbeth” presents a toxic masculinity, a warped concept of manhood, that becomes the tool Lady Macbeth uses to spur her husband to greatness. As Abraham commented, she “wants to restore some broken aspect of his manhood.” Ironically, by trying to find meaning and happiness, through desperate, morally wrong means, our couple destroy their lives. The beautiful tragedy, says Abraham, “is of them trying to find a depth of feeling, some happiness in their life, and absolutely, profoundly, tragically missing each other on their way to getting there.”

In addition to the female suffering, we also see that Macbeth (Carlson) is a victim. For Abraham what is disturbing is that Macbeth starts out as a good man; “he is a good guy, no more or less guilty than anyone else… He’s a general, valiant, strong, noble. So why him?” “Macbeth” is not a revenge play, and there is no clear character flaw, as with Iago in “Othello,” that would make Macbeth a target. “It could be any man,” says Abraham, and that is where the shock and terror lie. “Macbeth” brings the question of action, agency, goodness and morality into stark relief, asking why good people do terrible things and giving the audience many questions to contemplate. 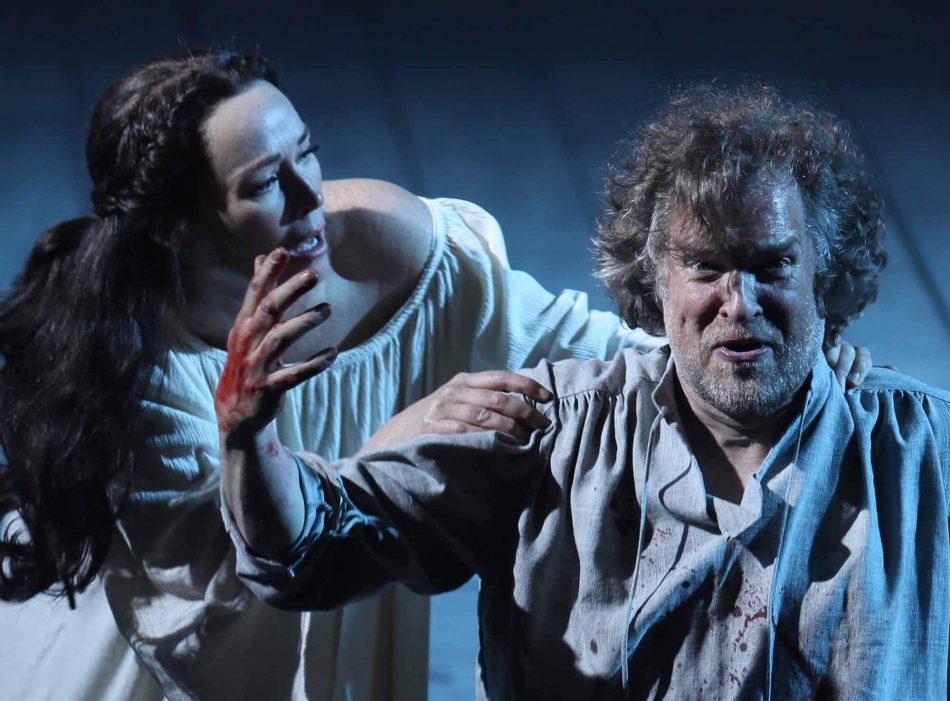 Abraham’s production unwraps Shakespeare’s text, bringing into discussion tyrannical power, patriarchy, morality, broken concepts of manhood and toxic masculinity. The women of the play are victims of war, and the men are victims of false notions of power and identity. The persistent cries of women remind the audience that the world of “Macbeth” is broken, reflecting elements of our modern world.

After all this suffering and tragedy, what does Abraham hope the audience takes away from his production? The ability to marvel at the beauty of the human experience, whether happy or tragic and the fact that “we can put [the human experience] into words and we can understand each other.”

While “Macbeth” is a tragedy, the play alone is proof that humanity can empathize through shared experience. Abraham reminds us that the play shows that “we can understand each other’s suffering and pain. That we are not alone.” Suffering and loss don’t have to be endured in solitary silence, and we can discuss our experiences. This is what Shakespeare helps us to do, to talk about being human. As Abraham said at the end of our interview, “I hope [the audience] feels the pleasure of remembering that there is a writer that wrote 500 years ago that could express in poetry powerful, sublime, subtle things about the intricacies of what it means to be human. On some basic level every time I do Shakespeare if we only accomplish that, we would be good.” 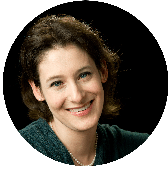 Corrie Shoemaker is a recent University of Waterloo PhD graduate. She had the honour to work alongside the Stratford Festival of Canada and Bard on the Beach while researching Canadian identity on the Shakespeare stage. Her first novel “The Frenchman’s Daughter,” a historical mystery set in 1890s France and England, will be published in 2019.You can follow Corrie at her website The Write Stuff: Literature with Charm.

Chris Abraham’s ‘Macbeth’ at Bard on the Beach: Murder, Mayhem, and Toxic Masculinity 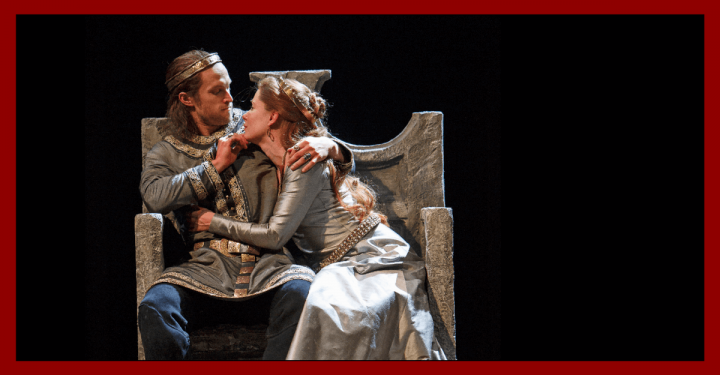