Newfoundland and Labrador is pulling its weight when it comes to theatre making these days. No matter where you look you see the Rock making a mighty influence on the state of theatre today.

“Come from Away”, the musical inspired by the residents of Gander’s hospitality toward stranded passengers on 9/11, has just opened on Broadway to great success. While it is not directly connected to Artistic Fraud of Newfoundland, the theatre company behind “The Colony of Unrequited Dreams” currently playing at the Grand, it is worth making a connection.

For over two decades director Jillian Keiley and playwright / Artistic Director Robert Chafe have been creating theatre with Artistic Fraud of Newfoundland and then taking those theatre pieces on tour across Canada. An appetite and appreciation for Newfoundland culture and story has grown, in part, because of Artistic Fraud. 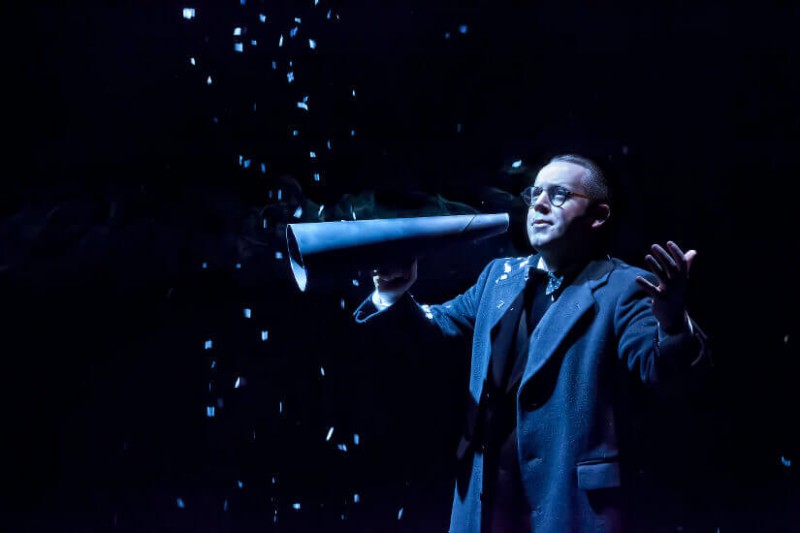 Colin Furlong in “The Colony of Unrequited Dreams.
Photo via Timothy Richard”

The artists behind Artistic Fraud have also gained esteem over this time.

Chafe, who started with the company as an actor, has become a Governor General Award winning playwright.

Keiley left Artistic Fraud in 2012 to become the Artistic Director of the National Arts Centre English Theatre. Keiley has become a household name to fans of the Stratford Festival with acclaimed productions such as “The Diary of Anne Frank” and “Alice Through the Looking Glass.”

Long-time company member Petrina Bromley is currently starring in the aforementioned “Come from Away.”

Keiley’s style of directing, and in extension the design of her productions, is informed by Artistic Fraud’s penchant for touring their shows. It is a style distinct to Canada.

With the exception of Russia, no other country has so much land and so few roads. So if you are going to take a theatre piece across the country, you have to design and direct the play so that it can pack up small and tour far.

What is remarkable about the Artistic Fraud’s work is that it is visually impactful while being practical for traveling.

Let’s take a look at the past two productions of Keiley’s that have come to the Grand Theatre.

Previous works at the Grand Theatre

This was a production of Theatre Newfoundland Labrador, but Keiley’s directing style, synonymous with Artistic Fraud, was front and centre.

“Tempting Providence” is a production I reference when I describe Keiley’s work. It sums up the style of theatre that has come from the Rock.

A table, four chairs and a white sheet were the set.

They were used expertly to create sleighs, ships, houses and a baby crib among other things. The story is of Myra Bennett, an English nurse who came to Newfoundland and served as one of Newfoundland’s few nurses at the turn of the century. 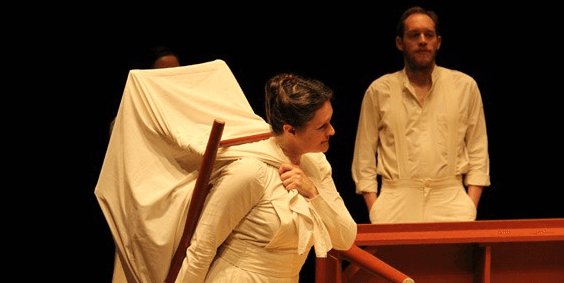 The next encounter London audiences had with Keiley’s work was “Oil and Water” written by Robert Chafe and a production of Artistic Fraud.

This play told the story of Lanier Phillips, a black US Navy private who washed up onto Newfoundland after the shipwreck of the USS Truxtun.

The set design by Shawn Kerwin featured one central sculptural piece which was a ladder/crow’s nest/rocking horse hybrid. It so clearly evoked the image and movement of a ship. These sophisticated but easy to travel designs are essential to traveling across Canada. 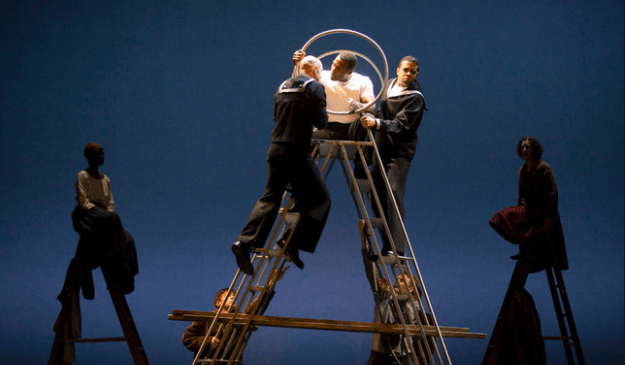 The cast of “Oil and Water.”

This style of hearty traveling Canadian theatre did not begin with Artistic Fraud, in fact we can look to our own backyard to see an early example of this kind of Canadian tour. In 1975 James Reaney and the NDWT Theatre rehearsed Reaney’s masterwork “The Donnelly Trilogy” in London, Ontario and took it on tour across Canada. The tour is documented in the fantastic travel log by Reaney “Fourteen Barrels from Sea to Sea.” 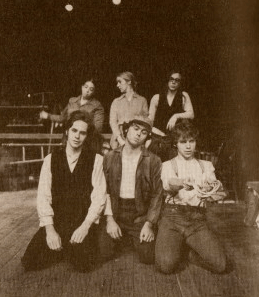 The original production of “St. Nicholas Hotel” at Tarragon Theatre, 1974.

The NDWT Company initials were said to be meaningless, though some say they stand for “No Debts With Turnbull” a reference to the director Keith Turnbull or “No Doubt We’re Thesps.” The tour was ambitious, NDWT presented the entire nine hour Donnelly Trilogy: “Sticks and Stones,” “St. Nicholas Hotel” and “Handcuffs.” Plus, if that wasn’t enough, they also had a production of “Hamlet” in their repertory.

I highly recommend Reaney’s book which is full of the wild and unpredictable antidotes of life on the road.

The company essentially toured with only fourteen barrels which were the required set and props for the production.

What was fantastic about the NDWT and is fantastic about Artistic Fraud of Newfoundland is that they have not let geography get in the way of sharing their work with the widest amount of Canadians as possible.

This philosophy of Artistic Fraud can also be seen in how the National Arts Centre English Theatre is operating since Keiley took over as Artistic Director. The NAC English Theatre has now put a great emphasis on partnering with theatre creators across the country.

Some of these productions never perform in Ottawa, instead the entire country is now being influenced by, and seeing, NAC supported theatre.

Artistic Fraud’s current work and Reaney’s past work should be beacons to Southwest theatre makers to follow suit. We can take our region on the road and share it with the country. We should be proud of our local culture and be all ears for the local cultures of every region of Canada. Then we get to see the great quilt that is Canada.

Artistic Fraud’s “The Colony of Unrequited Dreams” will play at the Grand Theatre until April 8. Click here to buy tickets.