is the first sentence

Keith Tomasek, the publisher of this wesbsite, did not fall asleep on the spacebar when posting my article.

As a writer, I made the choice to leave lots of space at the top of this page.

After we gagged on gilding and decoration in the Rococo period of the eighteenth century, artists have been making art sparser and “classier”. “Classy” now refers to a tasteful simplicity in art and design and for good reason. Neo-classical was the period of art which directly followed Rococo. It went back to the Greek and Roman simplicity. Ever since, with a small detour into the clutter of the Victorians, artists have been coming to the conclusion that the negative space, the space you choose to leave empty, is just as important as the space you fill.

The fictional totally white paining in Yasmina Reza’s ‘ART’ symbolizes the pinnacle of this idea.

What annoys the character Marc in ‘ART,’ currently on stage at The Grand Theatre in London, is that his friend Serge has spent so much money on a white painting with three white lines on it.

The assumption Marc is making is that art in order to be valuable must have had a high level of physical labour placed into its creation. After all, in our society labour is a commodity. Goods are assigned value based on how long it takes to produce them. Marc assumes the same about visual art, and traditionally this was true.

But not with modern art.

In modern art ideas equal value. Just as I choose to use the idea to leave the top of his article mostly blank, so does the fictional artist in ‘ART,’ Antrios, choose to leave his painting mostly blank. Serge spent money on an idea, not on physical labour.

The most common comment about modern art is that “my kid could do that”. There are of course two big issues with that.

Firstly it discounts the creative work of children, which can be profound, and give great insights into our society. After 9/11 primary school teachers and parents of young children found that children’s drawings frequently depicted burning buildings and plane crashes. 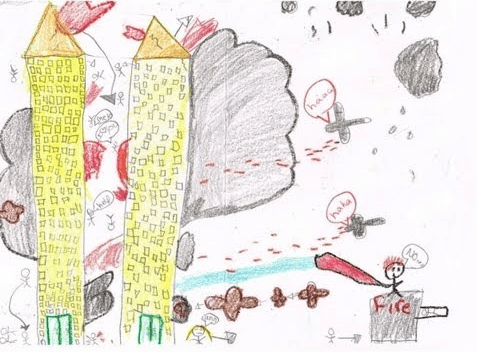 The children’s drawings were reflecting society.

Secondly this comment ignores the ideas behind the art. As I have said, Marc is a traditionalist who values labour and can’t understand the notion of paying for the idea of the abstract painting.

Of course one can equally make the argument that the painting in ‘ART’ is utter pretentious junk.

I will point out here a detail of the title of the play that is often overlooked. Reza has called her play ‘ART’ in quotations. Think about when you say something using air-quotes. You are questioning something’s validity. So you can interpret the play as questioning if the painting at the centre of the story is actually art. At the very least Reza is inviting us to question what art really is.

The play asks us to consider what we value.

Art dealing is big business. Buying art is a way for the very wealthy to invest their money. Serge invests his money into a blank canvas. This can be seen as a metaphor for the modern economy. People invest money into invisible futures, shaky hedge funds and other intangible money ventures. ‘ART’ was written in the 1990s during a major rescession. The excess of the eighties had faded.

The language around art over the past two decades has become increasingly incomprehensible. In the nineties and two-thousands it became likely you would find information panels in galleries with double negative sentences, gratuitous big words or run-on sentences. In 2012 artists Alix Rule and David Levine published an essay called “International-Art English”. The term International Art English has become commonly used to describe pretentious writing about art. Thankfully this kind of bad writing is out of fashion. There is a strong movement in the art world to write about art in a simple fashion.

I have a suspicion that the reason International-Art English became so common was because it covered up the shallowness of certain works of modern art. Keep in mind the white painting in ‘ART’ could be just as likely pretentious garbage, as it could be a profound masterpiece. 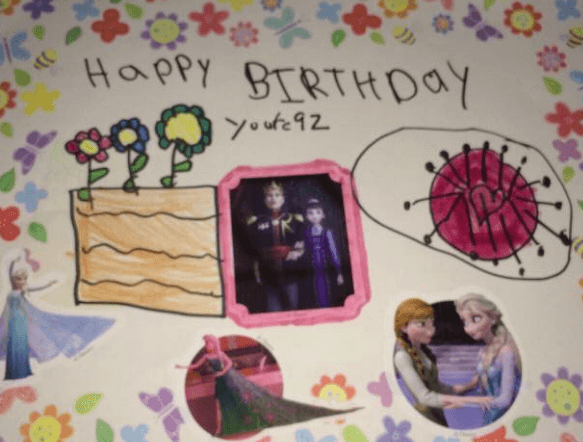 ‘Friendship’- Could my Kid do That?

I recently did an interview with actor E.B. Smith, who stars in ‘ART.’ He pointed out that this is a play written by a woman about male friendship and it does not depict a pleasant view of male friendship. The relationship between the three men in ‘ART’ is aggressive, competitive and sometimes outright mean.

Friendship is an art.

Keeping friends is an art.

The title of the play ‘ART’ could just as well be ‘FRIENDSHIP’. The quotes equally apply to friendship of the three men in the play. Is what we see on stage a real friendship or just a ‘friendship’?

Just as people often say about art “my kid could do that”, so do we assume children are good at making friends. I would argue making friends is an art form that takes a lifetime to prefect. Ask yourself how many people have you stayed friends with from your childhood- likely none, perhaps a few.

In the process of writing about good art, bad art, and friendship, I asked my Facebook friends who have children if they could ask their children to draw a picture of “friendship”. 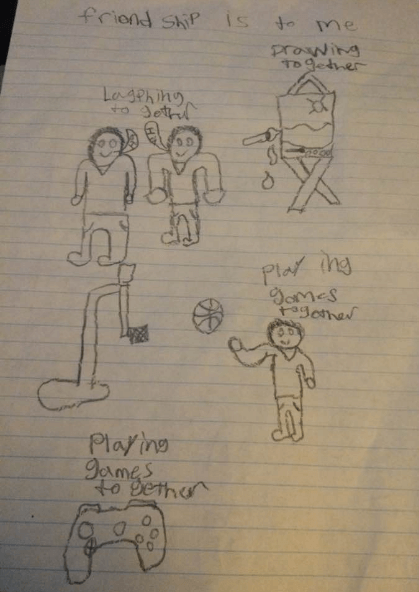 I got a few samples back that I have included throughout this article. These drawings are done with care, also thoughtfulness. Thoughtfulness is what we value in art.

It really is the “thought that counts.”

The same could be said for friendship.

Friendship, maintaining friendship, involves a great deal of mindfulness. We become friends with people who don’t just act like our friends, but genuinely work at the relationship.

So take a friend to see ‘ART,’ there’s no doubt you’ll laugh and have a good time. You might even have a conversation about the value of art, not only art that hangs silently on walls but art that engages theatres full of citizens ready to contemplate ideas from afar.

‘ART’- my kid could do that 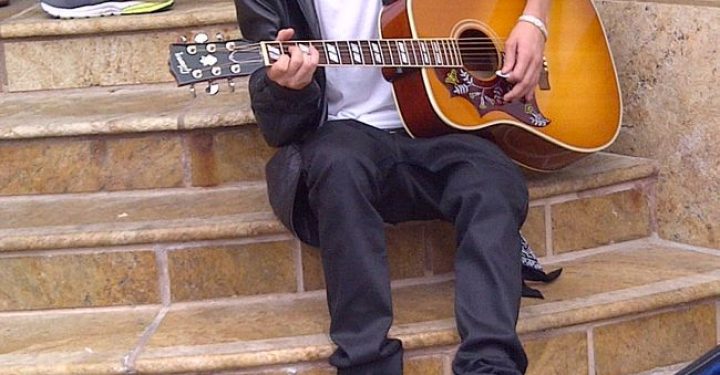