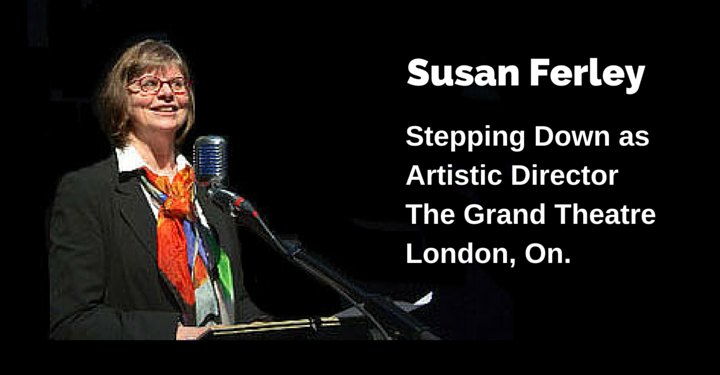 She followed in the footsteps of Artistic Dircetors Michael Shamata (1995–1999) and Kelly Handerek (1999–2001), becoming the longest serving Artistic Director in The Grand Theatre’s 42-year history as a professional theatre.

“I have been honoured to serve as Artistic Director of The Grand Theatre.

Theatre is a collaborative art form and any success that has been realized is the result of many working together. I have been endlessly inspired by artists as well as the young people involved in our youth programs here at The Grand,” said Ms Ferley.

Ms Ferley spearheaded the annual programming of The Grand Theatre High School Project (HSP) – the only program of its kind in North America. She directed 16 HSP productions and has mentored and inspired hundreds of students, many of whom went on to professional careers in theatre.

It’s a program she is so dedicated to that she is returning, as guest director, for the Fall 2016 High School Project, Les Miserables School Edition.

Ms Ferley’s commitment to cultivating and mentoring theatre artists included the development of a variety of innovative apprenticeship programs that, in addition to The High School Project, established The Grand as a teaching theatre.

Executive Director of The Grand Theatre Deb Harvey said “With her guidance, we enjoy a healthy arts and business partnership that has focused on growing audiences and celebrating live professional theatre in this beautiful space.”

The London Free Press reports that since 2001, a year after Harvey took over the business side of the operation, together Ferley and Harvey produced 15 consecutive surpluses, bolstered by stable funding of $500,000 annually from the city and about $427,000 from other levels of government, representing 17% of the theatre’s revenue.

The Grand Theatre’s Board of Directors will immediately begin the process of nominating a Search Committee to identify Ms Ferley’s successor, who will assume leadership for the 2016/17 season this summer.

– Artistic directors of the Grand Theatre: