The Stratford Festival 2016 playbill offers a mix of well-known Shakespearean works, musicals, famous non-Shakespeare plays, something for the family, and smaller productions of new works and adaptations.

This particular blend seems to be the recipe for success that the Festival has developed over the last few years (Stratford seasons going back at least a decade look much the same). 2016, however, also offers something completely new in “Shakespeare in Love,” the North American premiere of a West End production adapted from an Oscar-winning movie.

This has to be a first for the Festival.

It’s an interesting choice in many ways. “Shakespeare in Love: The Play” is a fun, romantic period piece that I had the opportunity to see in its only previous production, in London’s West End. 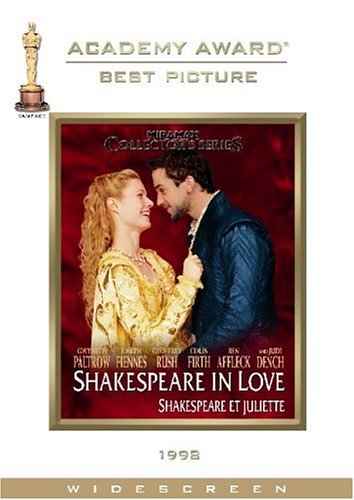 The film starred Joseph Fiennes and Gwyneth Paltrow (among many other stars) as William Shakespeare and his star-crossed love Viola De Lesseps.

The screenplay was written by esteemed playwright Tom Stoppard, and offers a completely fictional imagining of the story behind the writing of “Romeo and Juliet.”

In short, “Shakespeare in Love” is a romantic comedy for Shakespeare nerds and anyone who loves a good period piece.

Funny, romantic, and visually beautiful, with a fantastic score, it’s exactly my cup of tea. I’m not alone: the film was very well reviewed back in the 90s, and was nominated for thirteen Oscars, of which it won seven, including Best Picture.

However, many people hate this movie as violently as others love it. For example, the Toronto-based podcast “The Dew Over” offers a “reconsideration” of each year in Oscar history. In the 1998 episode, all of the panelists agreed that “Shakespeare in Love” should not have won best picture. One lone guest was left defending the movie as light, clever and entertaining (if not Best-Picture worthy) among a sea of hatred. The views of these podcasters essentially echoed the New York Times’ Ben Brantley, who reflected:

“In retrospect, it’s no surprise that [Shakespeare in Love’s] producers, including the tireless Weinstein brothers, were able to bulldoze it all the way to an Oscar for best picture. Seen with cold eyes 16 years on, ‘Shakespeare in Love’ (the movie) feels more annoyingly precious than you might recall, and you may wonder, ‘What was I thinking, or drinking, in those days?…‘”

So, why did this movie that by many accounts doesn’t stand the test of time, end up getting a West End reboot sixteen years after its release? I don’t know the exact answer to that question, but the theatrical adaptation did have Disney Theatrical bulldozing it to the stage as the Weinsteins did for the screen.

Even with its detractors, its easy to see why a big name like Disney would back this particular production; a well-loved, Oscar-winning movie that tells a light, romantic story about London’s most famous playwright seems like a slam-dunk for the London stage.

Whether this was the case, and whether this will be a slam-dunk for Stratford, remains to be seen. The West End production garnered generally positive reviews, a Best New Comedy Olivier nomination and a What’s on Stage award for Best New Play (by public vote). 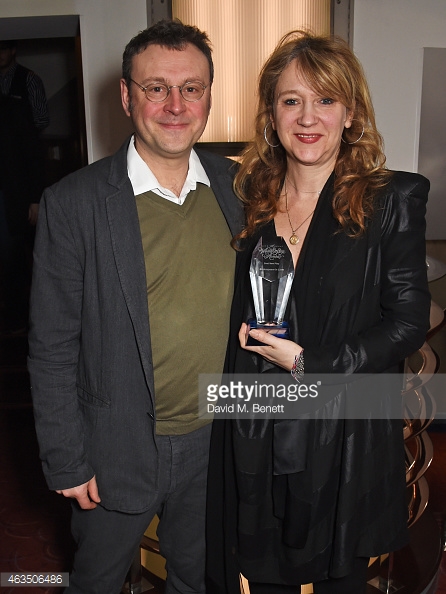 However, the play closed after ten months, the New York Times review quoted above was certainly not positive, and the much-rumoured Broadway transfer never occurred.

This unique Stratford production, then, premiering “by special arrangement” with Disney Theatrical and Sonia Friedman Productions, looks an awful lot like a trial run en route to a Broadway transfer.

Might the Stratford cast have the chance to head to Broadway, as they did with 2011’s “Jesus Christ Superstar”?

The Toronto Star reports that Luke Humphrey and Shannon Taylor might be the next Stratford stars to make it to Broadway, having landed the lead roles of William Shakespeare and Viola de Lesseps.

During the 2013 Stratford season Humphrey starred in “The Three Musketeers” and “Taking Shakespeare“. Taylor is currently appearing in “Oedipus Rex,” “She Stoops to Conquer” and as Margot Frank in “The Diary of Anne Frank.”

90% of the Dialogue Comes From the Movie

This is shaping up to be a promising production. I saw the London version in July 2014 and, while I wasn’t blown away, I enjoyed it. About 90% of the dialogue comes from the movie; so whether or not you enjoy the film is probably a pretty good indication of how you’ll feel about the play.

The staging was of course quite different and was in my opinion, very well done (we’ll see if Stratford mimics the grand multi-story Elizabethan playhouse of the London stage). The music, too, while not the beautiful score that I so love in the movie, was creative and fittingly Elizabethan.

There will probably be some who think mounting “Shakespeare in Love” at the Stratford Festival is a travesty.

The Stratford Festival 2016 playbill features only 2 straight-up, unabridged Shakespearean productions (plus the “distilled” history play cycle “Breath of Kings”), and this “Shakespeare-flavoured” (as Ben Bradley eloquently put it) work. I absolutely believe that the Festival should continue producing true-to-text Shakespeare, and that people of all ages should have the opportunity to see the Bard’s work.

However, I think that “Shakespeare in Love,” both the play and the movie, is a great “gateway drug” (as one of the very angry panelists on The Dew Over phrased it) to Shakespeare and his times.

I remember watching the first ten minutes of the movie “Shakespeare in Love” (which features Will walking through the streets of London) in a high school drama class, just to get a sense of Shakespeare’s world.

While neither the play nor the movie are intended for kids, the play could draw in young and older adults who love the movie, or enjoy lighter theatre fare, but might find themselves falling in love with Shakespeare’s words (the play features a hefty number of lines straight from Romeo and Juliet) and times.

Described in The Guardian as “a love letter to theatre itself,” the play might even open the eyes of movie-goers to the magic of live theatre.

Could it be that Stratford is falling into the belief, repeatedly parroted and ultimately undermined in “Shakespeare in Love,” that audiences want comedy, love triumphant, and “a bit with a dog”? Are they right? 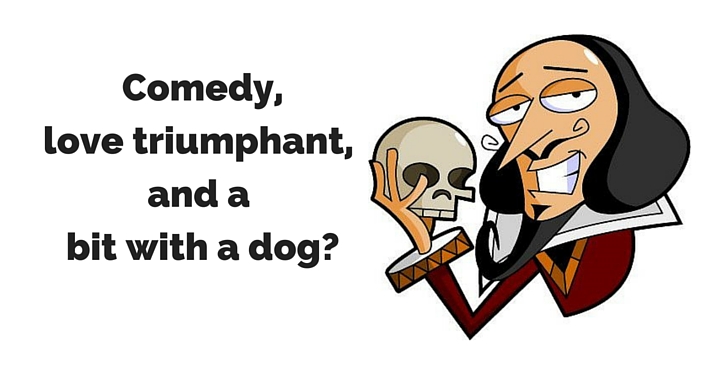 Shakespeare in Love at the Stratford Festival 2016