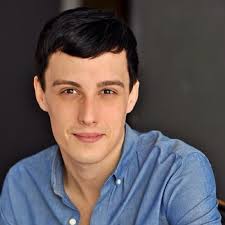 Robert Markus plays Denny Doherty in the Grand Theatre’s production of “Dream a Little Dream,” the nearly true story of The Mamas and The Papas.

“Dream a Little Dream” chronicles the meteoric rise and fall of The Mamas and The Papas as seen through the eyes of band member Denny Doherty.

No stranger to rock musicals, Markus played Tommy at The Stratford Festival’s 2013 production of “The Who’s Tommy.”

That production was directed by Des McAnuff who won a Tony Award as Best Director, for the 1993 production.

The Stratford Beacon Herald’s Laura Cudworth wrote, “Newcomer Robert Markus (Tommy) is the face of innocence. Even in silence he’s endearing. And what a set of pipes,” adding that he’s a young actor to watch.

I asked Markus about playing such iconic characters.

1) You performed “The Who’s Tommy” in front of Pete Townshend and “Dream a Little Dream” in front of Denny Doherty’s son and daughter, John and Emberly Doherty.

Which was more daunting?

I think Tommy was more daunting because of the fact that Pete sat in on some of our rehearsals.

I had the opportunity to talk with him a few times during the rehearsal process at Stratford. He is such an intelligent and well spoken man, I was really grateful for the insight he had for me about the show.

I did have a chance to meet Denny’s kids at opening. John and Emberly Doherty were so gracious at the show’s reception. It was such a pleasure to meet them both.

2) You played Tommy in “The Who’s Tommy” and now Denny Doherty. How have these roles influenced your feelings about music from that generation?

It has given me an appreciation of music from the 60’s and for fantastic songwriters of the time.

The 60’s was a time for such huge political and cultural change. It’s fascinating to see how the change in society was being reflected into the world of popular music.

Do you feel the show has remained true to his original vision?

The show opens with the number “Dedicated to the one I Love”. I find that fitting as I think Denny and Paul Ledoux set out to write the show to honour Cass’ memory.

4) In “Dream a Little Dream” you sing songs with intricate harmony, how long did it take to learn the songs?

We rehearsed for two and a half weeks which included both time for music and for staging.

Our music director on “Dream”, Marek Norman, is fantastic. A wealth of knowledge of music of the era and a fantastic musician himself. He’s an inspiration! Marek and Lezlie (our director) assembled a really fantastic cast for this show.

5) When did you start training for a career in Musical theatre?

I was in high school when I took my first singing lesson.

After being accepted into my high school drama program, I auditioned for community theatre productions and had the opportunity to do a couple of community musicals in Vancouver (my hometown).

6) Doherty has written that, In the early days of his career. after “a year of slogging it out in the clubs in Montreal and Toronto” he went to New York.”

Have you ever felt like leaving Canada to make it in New York?

I love working in Canada!

But in the future I will be considering branching out to have a career where I can hopefully manage a career and work in both Canada and the States.

From each pair below pick one:

A) The Beatles or the The Rolling Stones?

I think they have more sensitivity to their lyrics rather than raw power. It allowes me to feel more connected to their music.

b) The drug culture of the 60’s or the digital age we live in now?

The drug culture of the 60’s is fascinating but the convenience of the digital age we live in now wins for me. It’s hard to think of life pre-Google.

But don’t get me wrong I’m a huge fan of Pasek and Paul. I have a song from their production of “James and the Giant Peach” on repeat on my iTunes.

Dream a Little Dream is at The Grand Theatre until April 11.