Klout is a tool used to measure social media reach and authority.

While it’s not universally accepted, it is worth monitoring.

Below are the Klout rankings for 2014 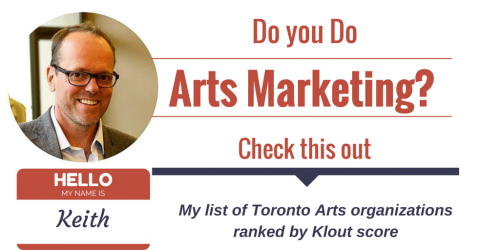 Digital Engagement is a Leading Indicator of Box Office Success

The whitepaper examines the behaviours associated with the digital ticket buyer decision-making process and suggests digital engagement is a leading indicator of box office success.

Therefore, now more than ever, it’s essential to have a digital strategy before, and after, opening night.

This study by Crimson Hexagon examines how audience engagement was a driver of purchase intent for albums released by Kanye West and J. Cole. The research indicates that despite weaker critical reviews, the genuine digital interactions by J. Cole’s audience drove a deep connection to the album, “Born Sinner” which led to stronger loyalty and faster sales.

Twitter is a powerful social media platform with capacity for Arts organizations to reach a variety of targeted users. It’s also easy for audience members to share their thoughts about a production on Twitter.

3 Things You Need To Ask Yourself to Improve Twitter Engagement.