Kevin Spacey’s new documentary film “NOW: in the Wings on a World Stage” debuted for one night only in theatres across Canada.

The film captures the ten-month theatrical tour in which Spacey played Shakespeare’s Richard III in venues around the world. The play was directed by Sam Mendes (Skyfall, American Beauty). 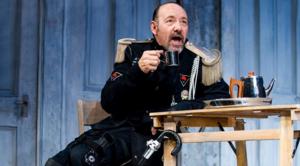 Spacey isn’t the first actor to capture the magic of Richard III on film. The 1996 documentary “Looking for Richard,” directed by Al Pacino, examines Shakespeare’s place in contemporary culture.

Spacey’s new film sets him apart from Pacino by demonstrating his ability to embrace digital distribution technology. Plus Spacey’s film celebrates people who do creative work each day, rather than Shakespeare himself.

Writing in the LA Times Kenneth Turan noted “”It’s that rare film that captures and conveys the romance of the theatrical experience.”

Spacey has a unique record of success in theatre, film and television. He’s also a maverick, taking risks to confront the status quo, disrupting conventional methods of production and distribution.

For example his new “NOW: in the Wings on a World Stage” was available online, even before it plays Canadian theatres tonight. This comes as good news for Spacey fans, many of whom, after devouring “House of Cards” on Netflix, ravenously searched the Internet for complex dramatic stories like a dieter searching for complex carbohydrates.

Prior to making his film available as an online download, Spacey reportedly spoke with comedian Louis CK, who, in just 10 days, grossed more than $1 million from downloads of his online comedy special, “Louis C. K.: Live at the Beacon Theater.”

Spacey is a leader in disrupting the traditional relationships between content creators and audiences. Spacey has taken a successful theatrical experience, the tour of “Richard lll,” and leveraged it for digital audiences.

Spacey has spoken about the need for television executives to embrace the digital age and abandon traditional methods of program development and distribution. It’s the reason he chose to partner with Netflix, rather than a traditional network.

In so doing, Spacey, and his collaborators Beau Willimon and David Fincher, disrupted the norms of television production and distribution.

You’ve heard of TV’s “Pilot Season,” where the TV networks order a single episode of a program. If the network likes the pilot, it gets on TV. But the odds are it won’t get renewed.

Spacey and his collaborators weren’t interested in making a pilot. They believed “House of Cards'” complex themes, anti-heroes and deliberate narratives didn’t suit the criteria networks use to judge a pilot.

In Spacey’s eyes pilot’s are a fools game.

In the era when Spacey was pitching “House of Cards” the networks spent about $400 million on pilots. Out of 113 pilots produced approximately 35 were broadcast. Only 13 got renewed, most for just a single season.

Netflix made the commitment that Spacey was seeking. They bought the series without a pilot. They didn’t make any creative demands.

“House of Cards” is a success. Production for a third season will begin later this year.

In the era of digital piracy, “House of Cards” proved audiences are willing to pay for sophisticated stories.

In the first quarter of 2014, when season 2 of “House of Cards’ debuted, Netflix added a net 2.25 million streaming subscribers in the U.S. and 1.75 million internationally. Netflix generated $1.27 billion in revenues compared to $1.02 billion in the same quarter of the previous year.

In a compelling speech presented to television executives, Spacey articulates that the success of Netfix’s “House of Cards” proves there is a new paradigm for connecting audiences with sophisticated stories.

“Give people what they want, when they want it, in the form they want it in-at a reasonable price-and they’ll more likely pay for it than steal it.”

“NOW: in the Wings on a World Stage” can be downloaded directly from kevinspacey.com