Some of Canada’s most talented improvisers are performing Nov. 23rd at the Blyth Memorial Hall, in Blyth, Ontario. 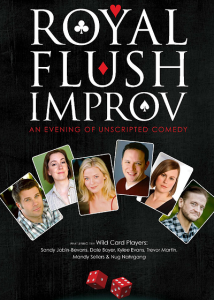 It’s rare that this much talent performs in a city with a population of 1.005.

The show is the brainchild of Blyth Festival General Manager Deb Sholdice and Mike “Nug” Nahrgang, who both worked at a local pizzeria years ago.

Nahrgang, originally from in Clinton, has won several Canadian Comedy awards, has appeared on CBC’s “The Ron James Show.”

On the Internet Nahrgang is renowned as “Mustard Man.”

According to Wikipedia, in 2004 “Mustard Man” made the top five of somethingugly.com’s “Ten Worst Things On The Internet” list. The true identity of the man pictured was unknown until the owners of Bloggerheads.com tracked down Nahrgang on the internet. Follow Nahrgang on Twitter.

Sellers, who is also from the area, has performed in comedy festivals across North America, and was recently featured in “Giving You The Business” on The Food Network. Follow Sellers on Twitter.

Sandy Jobin-Bevans, is an old friend. I recently interviewed him on my podcast “The Inadequate Life.” Jobin-Bevans has worked with Second City alumni including Martin Short and Dave Thomas, just to name a few. On the podcast he tells the story of his journey as an actor – from his early days at the Winnipeg Fringe Festival, being invited to audition for TV’s “Saturday Night Live and more.

Improv at the Blyth Memorial Hall