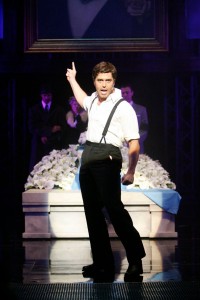 In 2010 Young played Che to great reviews at the Stratford Festival, in Stratford, Ontario. His performance was often singled out by the critics.

Highlights from the reviews include:
– “Our narrator for this episodic musical is Che, played by an animated and intense Josh Young, who really drives this production.”
Globe an Mail

– “Young makes it his own with an impressive passion and a simmering rage appropriate to a revolutionary who is determined to change the world.”
Toronto Sun

See all the “EVITA” reviews HERE.

Young studied musical theater at Syracuse University before embarking on a career that got a kick-start after his impressive work at The Stratford Festival, where, as well as playing Che in “Evita,” he starred as Judas in “Jesus Christ Superstar.”

The Stratford production of “Jesus Christ Superstar” was a hit and moved to Broadway where it received two Tony Awards.

Variety reviewed Superstar with this line:
“Young’s intense, darkly brooding good looks are perfect for the role and, as he proved in last year’s Stratford production of “Evita,” he knows how to wail appropriately to an Andrew Lloyd Webber score.”

All the Stratford Festival “Jesus Christ Superstar” reviews are HERE.

Earler this season Canadian fans were disappointed that Young dropped out of his scheduled commitment to play Fabrizio Naccarelli in the Shaw Festival production of “The Light in the Piazza”. 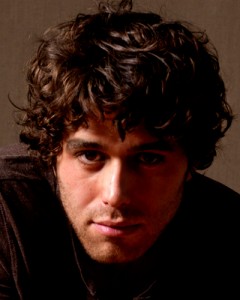 Responding on his Twitter account about his departure from the Shaw Festival Josh wrote: “I’m so sorry to let my friends down! But a trip to Niagara on the Lake and The Shaw Festival is an amazing experience and if you have plans, please keep them! I had to make a very difficult choice in the interest of my life and career. I sincerely hope to be back in the area soon… But you’ll now just have to drive a little further to see my next gig… And I really hope you do.”