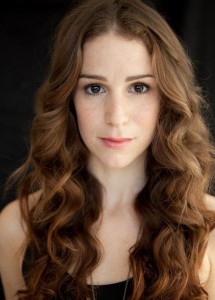 Chilina Kennedy, a Stratford Festival favourite since her 2009 debut as Maria in the hit production of West Side Story has been cast in the lead role of the new musical, Evangeline.

Written by Ted Dykstra (2 Pianos, 4 Hands) Evangeline was inspired by Longfellow’s classic poem that follows an Acadian girl’s search for her lost love Gabriel, during the time of the Expulsion of the Acadians.

The actor returns to Charlottetown twelve years after making her professional debut as Anne Shirley in Anne of Green Gables—The Musical. This summer, in addition to her role in Evangeline, Kennedy will also portray Miss Stacy in the Festival’s mainstay musical.

Kennedy is delighted to be returning to the Festival, “playing Anne at the Festival back in 2000 and 2001 marked the first major milestone in my career. I was fresh out of school and it was a dream role for me. What a wonderful full circle!”

Kennedy recently performed in the new musical, A Gentleman’s Guide to Love and Murder. It received excellent reviews, including this line from Charles Isherwood of The New York Times who called it “one of the most inspired and entertaining new musical comedies I’ve seen in years.”

Rumors are that Kennedy will return to Broadway to appear in A Gentleman’s Guide to Love and Murder this fall.