While the Shaw Festival’s selection of Tim Carroll as artistic director continues to percolate news and analysis, I’d like draw attention to another recently hired artistic director, Gil Garratt at the Blyth Festival.

Even before an actor walked on stage, Garratt’s debut was off to a great start. Ticket sales for his first season doubled, compared to the previous year, the first day they went on sale in April. 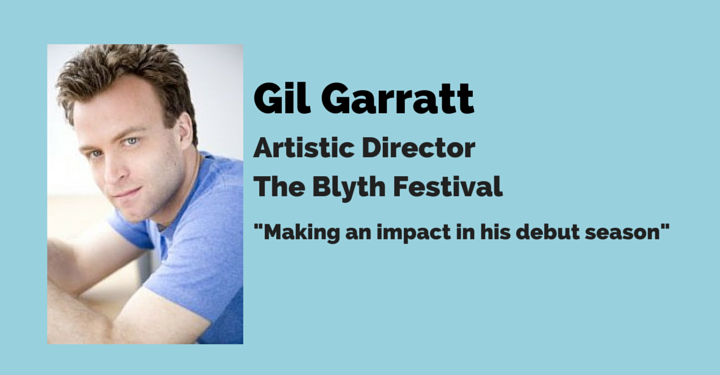 Then the solid production of Annabel Soutar’s “Seeds,” a dense, thought provoking piece of verbatim theatre, provided the Festival’s meaningful opening for a venue surrounded by farms.

More success followed with Sean Dixon’s “The Wilberforce Hotel” a risky selection that is proving to be another hit. That risk was mitigated by a foundation of trust Garratt began building with Dixon fourteen years ago when they acted together in Paul Thompson’s innovative production of “The Outdoor Donnellys” at Blyth.

Another stroke of brilliance was harnessing the doubly talented Ronnie Burkett. Garrat mounted Burkett’s “Edna Rural’s Church Supper” and had Burkett design the set and costumes for the world premiere of “Fury” at the Blyth Festival.

Burkett is not only an internationally recognized master puppeteer, here at home he’s won both a Dora Mavor Moore Award for Best Set Design and a Siminovitch Prize in Theatre honouring designers.

This season at Blyth provides not only insight into the success behind Garratt’s debut, but exemplifies how an artistic director with a depth of knowledge, history and understanding of the Canadian Theatre scene can see pieces of the puzzle that others might fail to connect.

In his recent book “Curtains? The Future of the Arts in America” Michael M. Kaiser cites risk aversion as one of the nails in regional theatre’s coffin. If theatres fail to challenge audiences, and stimulate them with relevant scripts, rather than mealy productions of inconsequential works, audiences will evaporate.

Writing about Dixon’s script, the Globe and Mail’s J. Kelly Nestruck noted that ““The Wilberforce Hotel” is an engaging unearthing of a little-known part of Ontario history”

Nestruck gave “The Wilberforce Hotel” 3 out of 4 stars. Here’s an excerpt from his review:

“”The Wilberforce Hotel” is a risky work in our times – a new play by a white playwright based on a black history, one that includes a blackface routine, no less. No wonder it sat unproduced for over a decade until Gil Garratt, Blyth’s new artistic director, took over the festival.”

The big challenge for artistic directors is not only programming risky, relevant work, but also directing. Garratt’s debut as director is “Mary’s Wedding,” and the reviews have been excellent.

Garratt’s collaborative soul was recognized by independent blogger and former theatre critic at the Kitchener-Waterloo Record Robert Reid whose review of the play included the line “It’s been some time since I’ve seen a creative team work so well together at Blyth.”

“Directing with sympathy, compassion and lyricism, Garrat gets stunning performances from Eli Ham as Charlie Edwards and Sophia Walker as both Mary Chalmers (Charlie’s betrothed) and Flowers (Charlie’s officer in the trenches). Ham and Walker generate wonderful stage chemistry.”

Garratt cast Walker who comes from the Stratford Festival where she’s performed for nine seasons. Her performance as Charmian in “Antony and Cleopatra” received favourable reviews.

In comparison, Reid’s review of Walker’s performances in “The Wilberforce Hotel” and in “Mary’s Wedding” heaped the praise proclaiming Walker “gave the festival some of its brightest moments this season. What a festival debut!”

Looking to the future, Garratt is hoping to develop stronger relationships with theatres across Canada and perhaps extend Blyth’s season.

So if you’d like to see some stellar Canadian theatre, and witness the work of an artistic director who is making an impact in his debut season, be sure to visit The Blyth Festival.

Why Gil Garratt is succeeding at the Blyth Festival