Kate Hennig has been acting, writing, and teaching for over 25 years. Her newest play, “The Last Wife,” is in performance at the Stratford Festival’s Studio Theatre until October 7th. 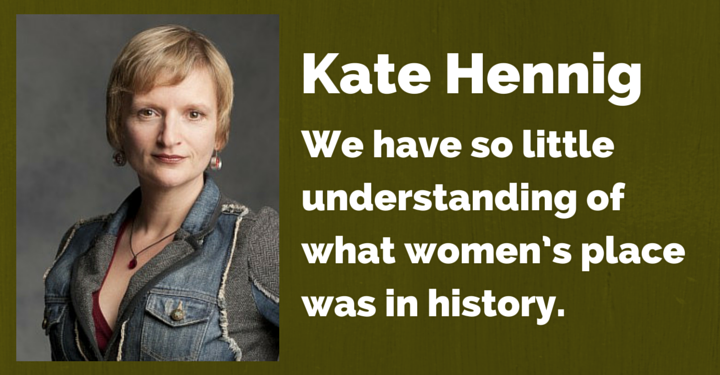 1. As a successful actor, when did you begin writing plays? What prompted this decision?

I started probably about 12 years ago. I was doing a really great play called “The Danish Play” in Toronto, a brand new play for Nightwood Theatre. And Kelly Thornton, who runs Nightwood, suggested that I write something and be part of the Groundswell Playwrights’ Unit, and so that’s when I started to write my first play. So I’ve written… this is my fourth play.

Was that something you’d ever thought about before it was suggested to you?

I’ve been writing all my life, in one way or another, but not plays. And plays are… extremely difficult. The… classical form of a play, is very, very confining, and it’s very difficult to write a good play. And I know that because I’ve [acted in] lots of plays. So it’s very intimidating to think that you could start writing and write a good play. So you have to get to this sort of precipice and then jump, because it you don’t jump you won’t go there.

2. Do you think that your acting experience makes your role as a playwright easier or more difficult?

Easier, for sure. Because as I say, I have [acted in] a lot of fantastic plays. I understand inherently because I do it all the time, I understand what action is, and I understand what conflict is. By the doing of it, not by the thinking about it, but by the actual doing of it. And so in that way I have a really good bullshit detector.

3. Your previous works range enormously in topic; how did you come to choose the story of Katherine Parr for The Last Wife?

I was doing Billy Elliot in Toronto, in February of 2011, and it was the year of the Arab Spring. And there was all of this amazing political upheaval going on in the Middle East and North Africa. And watching all of the stuff that was on television about that, you see these men, all these men, who are these total autocrats, and tyrants… And I was like, “Where are the women? Who are the women who are married to these people? Who are the daughters of these people? Where are the women? And what do they look like? And what do they think? And how do they cope with men like that? And what is their influence over those men in the bedroom and at the dinner table?”

So that fascinated me; and because of my own cultural upbringing as a white descendant of German immigrants, it’s not my place to write that play. So I looked at my own cultural mileau, and looked for a similar story. And… I just sort of thought, “Oh, well Henry VIII.”

And then I stumbled across Katherine Parr, really, because you start looking at all the wives of Henry VIII, and then you go, “Katherine Parr?” Nobody knows anything about Katherine Parr and she’s an amazing woman, and enormously accomplished for her time. And you can only imagine how much influence she had over those children [Henry VIII’s three children], because she was the one that was kind of around.

So that’s how I came across Katherine Parr, and as I read more and more about her I became more and more interested in her and her story.

4. The Last Wife also deals with present-day issues (especially around women’s rights); why did you choose to examine contemporary issues through a historical lens?

I’m always interested in that – if you look at my plays, as you say they seem to cover very different subject matter, but in fact they cover the same subject matter. Because history is such a male-based and male-dominated inheritance that we get, as women we have so little understanding of what women’s place was in history. Because women didn’t have the chance to write it, and didn’t have the chance to participate in the wars, and the political system, which is what is mostly recorded in history. They didn’t even get to be playwrights (very very few and far between) or poets. So we don’t even get that sort of cultural thing until the last 300 years or so.

So, to me, as a woman, I need to imagine my own history. So that’s, as a playwright, what I’m drawn to, is to the imagining of history, and the imagining of feminine and feminist history… what these woman were like.

And that kind of naturally leads into women today…?

Because it’s the only context that I have to imagine… is what my own personality is like. So I think of my own person, my own political agenda, my own capabilities within my profession, my own stubbornness, my own intellect. And I think, “How could women have been any different then? So how did they contain these feelings, and channel these feelings, within the constructs of their own historic context?”

5. The Stratford Festival 2015 season announcement described The Last Wife as “startlingly contemporary”; how might the audience expect to experience this contemporary feel?

In the language, mostly. It sounds like these people are, you know, living next door to you. And in the relationships… and of course, then, theatrically, in the design. You know, they’re not wearing stomachers and pumpkin pants.

So where did that decision come from, to write it in modern day language?

Again, that’s me going, “How do I create a world that’s looking at a historical set of circumstances, that shows that we haven’t changed?” So that’s sort of the way that I’ve done it.

… I’ve written an essay for the program, and the essay is called “You’ve Come a Long Way Baby.” Now, in the 1960s there was a cigarette ad campaign for a product called Virginia Slims. It was a cigarette that was aimed at women, and the slogan was “You’ve Come A Long Way Baby,” intimating that you don’t have to ask anyone to smoke anymore. But if we look at those advertisements now, they’re unbelievably sexist. So as soon as our context changes at all, we go, “Well, they obviously had not come a long way, at that point, even though they thought they had.”

So, I guess that’s part of the way I write, the way I’ve envisioned this play, is to show that, and really enhance that, by the fact that it could be happening right now. Even though it’s a set of historical circumstances, they’re just human beings, and they’re human beings dealing with their own set of circumstances.

We go around in circles, you know. And that’s also in my program essay… I have a theory that I call the Slinky Theory, which is that we’re all just on this spiral like a slinky… and every time we go around in a circle we’re just one little millimetre up the slinky. But we just keep ongoing around, just one millimeter up at a time. And we cover the same material again, but we’re just that much farther along… but only a millimeter.

6. The Tudor period is usually taken as a very dramatic, even tragic period, yet Antoni Cimolino described this play to me as “a comedy of all things.” Do you agree with that characterization?

It certainly has things that I hope will make you laugh, but it’s not a comedy in the classical sense, in the sense of Aristotelian dramatics. But I think the circumstances will be relatable, and through that there’s definitely moments of levity.

7. You mentioned in a 2013 interview that you were on the fifth draft of this play; what is the biggest change the play has undergone through its many revisions?

The most difficult part of the play was trying to include some of the circumstances of Katherine Parr outside of the relationship with Henry VIII. And that, in my play, is the story of her and Thomas Seymour.

And so what I learned through the writing of this play is that I needed to take Bess’ story out of this play, and write another play…. So now I’m working on Bess’ story, and I’m also starting to write Mary’s story, who is Henry’s other daughter.

That was something I was wondering about, how do you write the story of this very strong, very interesting woman in her own right, when her life is really framed by Thomas Seymour and Henry?

Right, so you’ll have to tell me if you think I succeed!

That’s tough, and that is also part of the relegation of women in history. In a way it’s a metaphor of it’s own, how difficult it is to write a play that actually focuses on someone other than Henry.

Read the companion piece to this interview here.
“The Last Wife” opens Aug. 14 at The Startford Festival. Watch for all the reviews here on Stratford Festival Reviews.